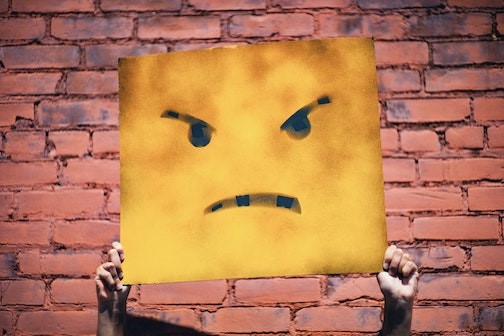 Have you noticed lately that everything that should be no big deal has become a big deal?

People are acting miserably toward each other.

People have become “triggered” over pronouns!

Everyone seems to be looking for some slight to be outraged about.

“Outrage” has become all the (ahem!) rage.

Road rage is a deadly threat when driving.

Irony and good-hearted humor and teasing are absolutely taboo because someone will be offended, for sure!

Anger is an emotion that is properly baked into our makeup as human beings created in the image of God.

Anger is a strong feeling of annoyance, displeasure, or even hostility when things are “not right”. It is the urge to correct what is “wrong” and make it “right”. Even God gets angry — so it should not be surprising that those created in his image have righteous anger built into our DNA!

Psychologists tell us that there are three types of anger that shape how we react in a situation. These are Passive Aggression, Open Aggression, and Assertive Anger. Only one of these, Assertive Anger, can be controlled and channeled for good. The two others eventually only lead to destructive damage to ourselves or others.

A good example of Assertive Anger in action is recounted in all four Gospels when Jesus felt compelled to do something to right the egregious wrong that had turned the temple courts in Jerusalem into a hive of extortionists and thieves.

Jesus entered the temple courts and drove out all who were buying and selling there. He overturned the tables of the money changers and the benches of those selling doves. “It is written,” he said to them, “‘My house will be called a house of prayer,’ but you are making it ‘a den of robbers.’” Matthew 21:12-13 NIV

Jesus knew that rhetoric or persuasion was not enough to convince the criminal element that had taken over the sacred place to leave and mend their ways. He, therefore, channeled his righteous anger into action. Notice that this action did not benefit him any way — quite the contrary, it only stoked more opposition to him and his mission — but he could not stand idly by and allow the desecration to continue. He knew that the “right” thing was for worshippers to enter into the temple to worship, not to be robbed.

So anger, rightly employed, is a positive force for good! We should be righteously angry at the exploitation of the poor, the helpless, at human trafficking, at hypocrisy in religious leaders.

However, we are still learning to be more like Jesus, and so the Bible gives us a good deal of instruction on how to deal with our anger. We need to be sure that God agrees that we should be angry and not just mindlessly acting on a pet peeve.

If there is a common thread in these instructions it seems to be that we should not allow a direct connection from our brain to our mouth without consulting the scripture or the Holy Spirit.

He that is slow to anger is better than the mighty; and he that ruleth his spirit than he that taketh a city. Proverbs 16:32 KJV

He that is slow to wrath is of great understanding: but he that is hasty of spirit exalteth folly. Proverbs 14:29 KJV

Those who consider themselves religious and yet do not keep a tight rein on their tongues deceive themselves, and their religion is worthless. James 1:26 NIV

If I may quote my own proverbs in this age of Twitter, Facebook, and email: “think before you ink!” “Anger is a dish best served slowly”! If you are not righting a wrong for the benefit of others rather than venting your own frustration, hit the delete key, send it to the trash!

My impetus for writing this column comes from re-reading the letter of James, a half-brother of Jesus and leader of the early church in Jerusalem, to the growing, persecuted church:

My dear brothers and sisters, take note of this: Everyone should be quick to listen, slow to speak and slow to become angry, because human anger does not produce the righteousness that God desires. James 1:19-20 NIV

This is terrific, useful, practical advice. James is saying that we should double-check our anger because the instinct of our sinful nature does not lead to an outcome that God wants. Impulsive anger is not only not useful, it is counterproductive to God’s plan for His Kingdom.

There are many things about which we should legitimately be angry and wrongs to be righted in this world, but let’s be sure we check in with the boss before we lay into them!

Let’s practice anger management as directed by the Holy Spirit!

May there be peace and countless blessings on you and yours,

What is The Salvation Army ROOTED Experience?

Rooted isn't about just "going through the motions".

Rooted is a small group discipleship experience that inspires questions, conversations, and experiences designed to connect people to God, the Church, and their purpose.

Rooted isn’t simply a Bible study or a book. Through Rooted, people will learn to practice 7 Rhythms essential to a healthy relationship with Jesus. Individuals will establish firm roots in the truth of God’s Word through personal study and then come together to discuss and practice what they’re learning in a space where they are safe and known.

Corps from across the territory will be doing this together. Others will be starting this week, however, we will be starting on September 13 and going through November 15. This is open to men and women - midweek on Tuesday nights at 6 PM.

Designed to be facilitated over 10 weeks through a local church or ministry, Rooted will energize existing groups as well as provide a clear pathway for new people to become connected—all while establishing foundational beliefs and practices for life in biblical community.

Please let Major Ann know if you are interested in attending. If we have more than 10 signed up, we will need to start a second group. (Won't that be exciting?!) 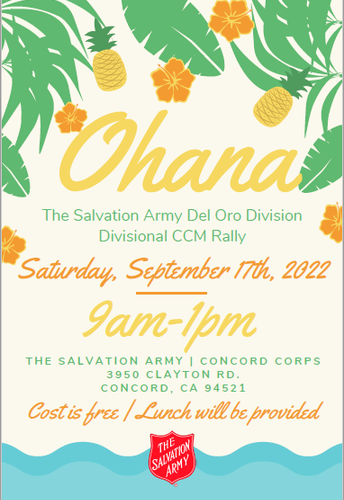 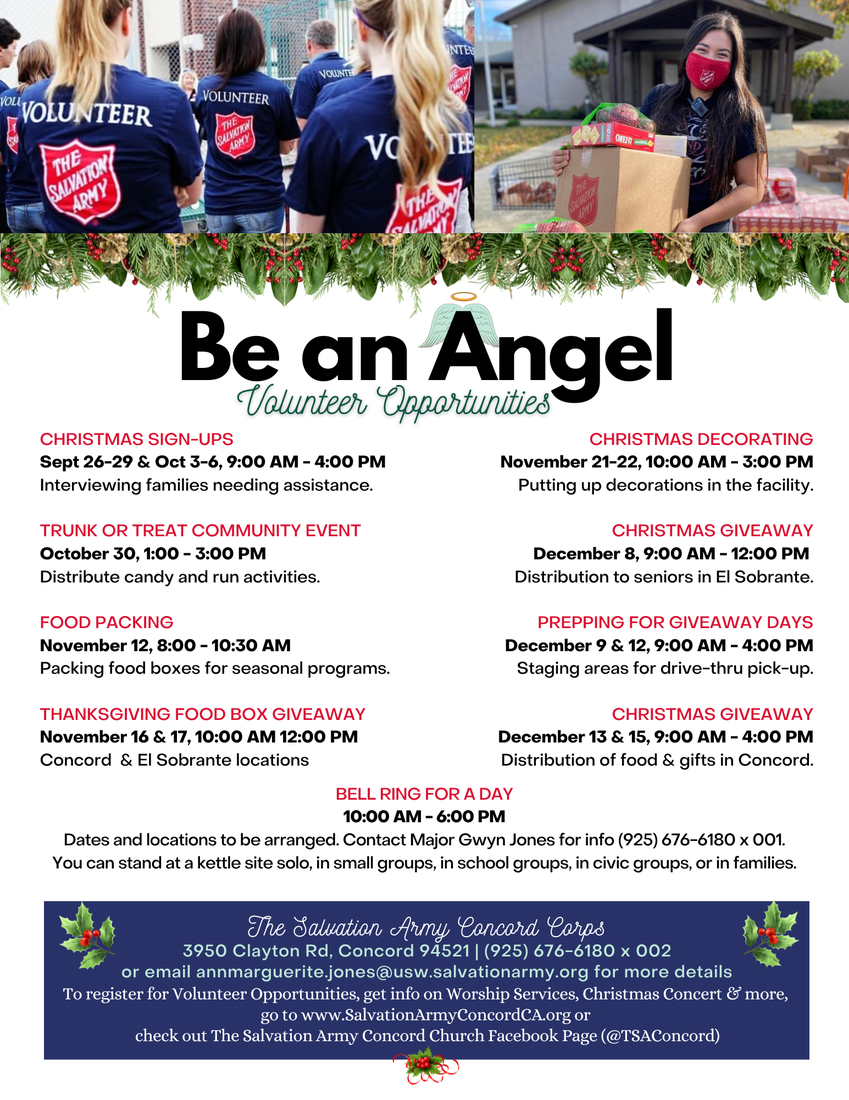 See separate flyers and information below: 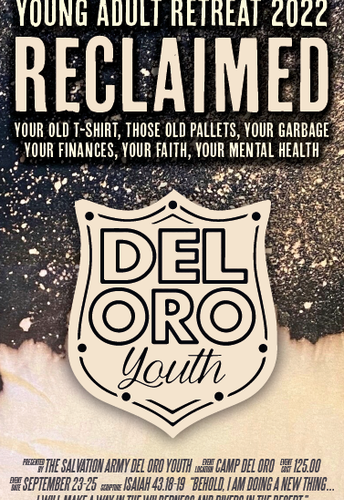 The cost for the full weekend is $65.00 per person but for those who are interested in attending for just a day (Saturday), the cost is $30.00 per person for ages 18-30 years old. Please be aware that there will be no children (aside from infants who are nursing) or pets allowed at this event.

Registration is due September 19. 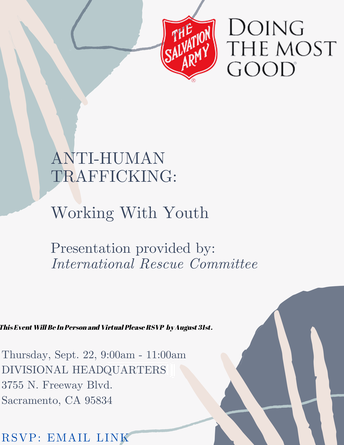 Human Trafficking is a crime impacting more than 20 million people worldwide. Knowing this alarming statistic, it is important that your Corps are empowered to identify and support victims of human trafficking. The International Rescue Committee (IRC) HOPE Anti-Trafficking Program serves Northern California, San Joaquin to the Oregon border, 30 counties in total. In this training, you will learn about human trafficking, and most importantly how to respond to and serve survivors.

Rodger Freeman has over 25 years of experience in training audiences of various sizes on issues regarding human trafficking, domestic violence, and sexual assault. He has trained agencies in northern California on how to successfully identify victims of human trafficking, screening methods, and trauma-informed techniques for working with victims. In addition to facilitating trainings to law enforcement, medical providers, and social service employees, Rodger also directly worked with survivors as a victim advocate for both a non-profit and a university for over 25 years.

Who can come? Anyone in your Corps that is providing direct support to clients, volunteers, and congregation members.

RSVP to either in-person or live streaming: https://forms.office.com/r/6kxTa0tN7r 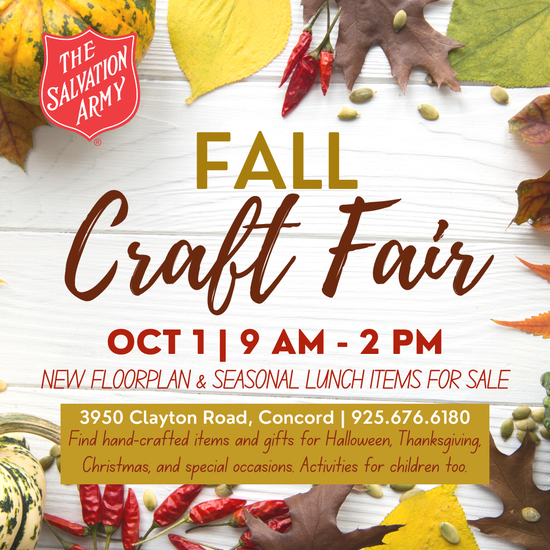 If you are interested in being a vendor, please mailto:lupewithers@gmail.com. She is taking the lead in communications with this event. 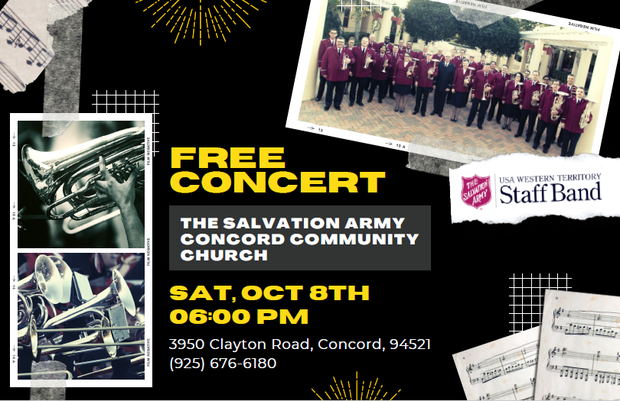 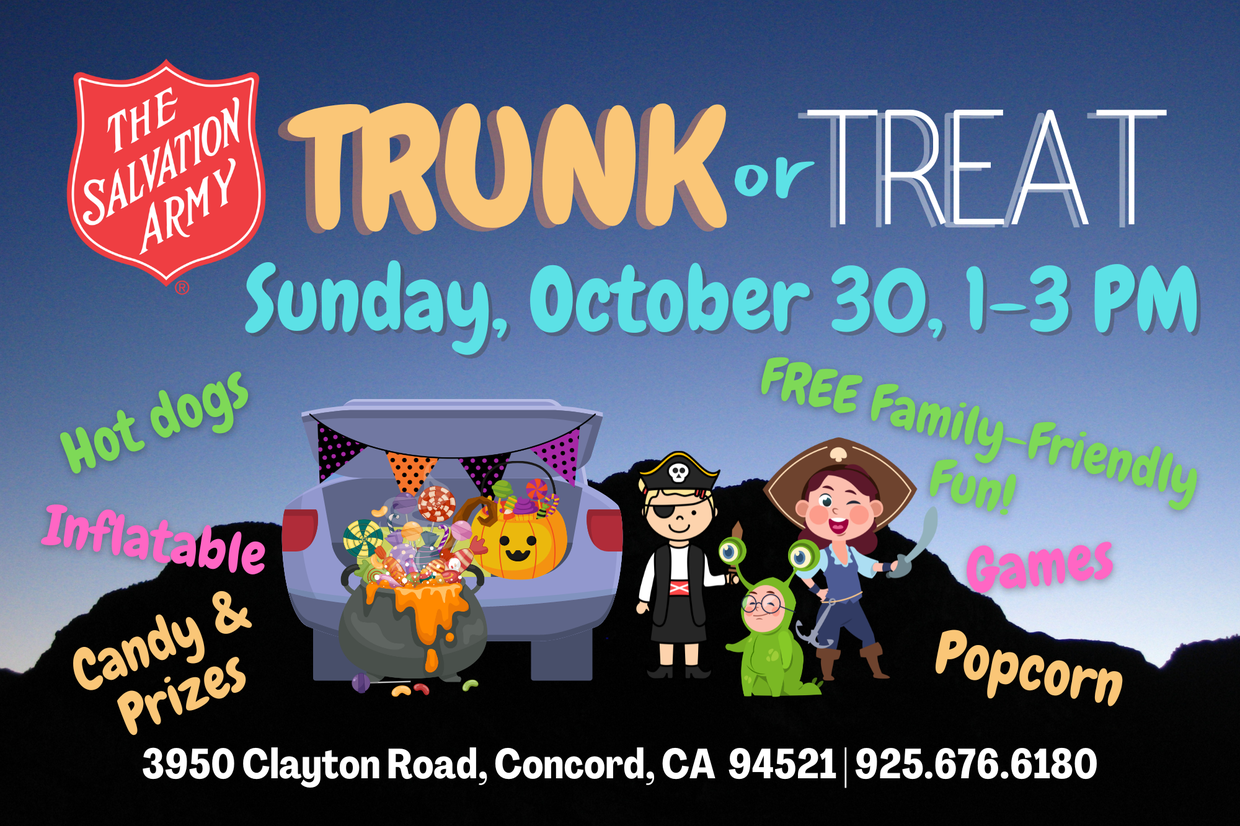 Facebook
3950 Clayton Road, Concord, CA, USA annmarguerite.jones@usw.salvationarmy.org (925) 676-6180 SalvationArmyConcordCA.org
Katy Nichole & Big Daddy Weave - "God Is In This Story" (Official Music Video)
Embed code is for website/blog and not email. To embed your newsletter in a Mass Notification System, click HERE to see how or reach out to support@smore.com
close