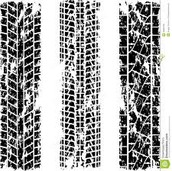 tire tracks found next to a dead body - murder

talked to dealer who sold tires