Working Conditions for Children in Factories

The conditions were bad, really bad. For example most machines did not have fences so kids and other workers could be exposed to moving parts of the machine. Also since the machines were packed together, children could go in between them, this made their work more dangerous. Kids would also get beaten and be verbally abused if they did not meet the requirements that the factory owners wanted.

Who knows how much sleep that little girl gets?

Another Girl in Textile Factory

How many times have her fingers been staple dub y the needles?

Boy in Coal Mine

How old is he? 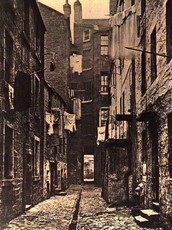 Living Conditions In The Slums

Many companies promised their workers houses. The houses most of the time were really bad. They were often built side by side, and back to back. Back then proper bathrooms and pluming had not been invented, so people had to do their business outside. At night "soil men" would come up and pick up the solid waste. The liquid wasted would go into the earth and polite the water, this caused "cholera" a horrible disease to spread. It all happened because of bad houses.