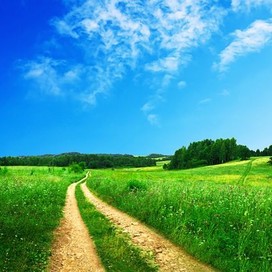 I was really starting to miss Stacey.

We had fallen out over him threatening to kill himself, and a fucking that wasn't particularly up to par.

Maybe it was because I fucked him sober while he was drunk; I'm making excuses.

He knew my body though. He knew how to please me like no one else did. It was terrible. I was craving him like I've never craved anyone.

I was upset, actually crying over this motherfucker.

What the hell is wrong with me?

Crying over a dumb bitch. That's what dumb bitches do.

I texted him once after all was said and done and then immediately after texted him back telling him that I was intoxicated so I didn't know what I was saying and basically to ignore me, which he did. Bastard.

But when I'm drunk, I'm myself and he's what I want.

Sitting at work, staring off into space, that man that I dreamt of having sex with the other night walks past me.

Then another man walked by.

Both of them. I need both of them at the same time. That will surely take my mind off of Stacey.

The first man, dare I call him Frank, a name so befitting of his quiet and non-existent persona it's not even laughable, sits at his desk every day. He hardly moves, staring off stoically as if he's counting down the seconds until he can leave.

He's worked here for a while. I can tell by his subservient demeanor.

He stares at me. I glance over at him and then he slowly turns his head back to its resting position until enough time has lapsed that it's okay for him to stare at me again.

As I'm glancing over to Frank, the second man, Paul, walks in front of my view. My eye catches he perfectly shaped ass in the tight khakis that he's wearing.

Collared shirt tucked in and belt neatly sitting above his ass. Perfect. It wouldn't be attractive on your every day pretty boy who works in the office. But on Paul, I swear to god, I was having trouble restraining myself.

I needed to think of a way to get them both. My lunch was in 30 minutes.

I walked over to Frank's department with my plan. Frank's supervisor, Lacy, and I were pretty decent friends and I she knew that I was attracted to Frank and that he stared at me.

"I want him today," I whispered to her.

"You know he has a girlfriend, but I don't think they're doing too well," she divulged.

"Then call him in for a meeting in the front conference room in about half an hour. His girlfriend won't have done what we're about to do, I can guarantee."

She bit her lip a little and looked past me to Frank. She nodded and I walked away casually.

Next was Paul. I was just going to be direct.

I walked into his office and closed the door. He looked at me and I didn't say a word. I walked behind his desk and grabbed his cock. He looked surprised.

"I want you to fuck me. Front conference room. 20 minutes." I whispered as I felt his cock stiffening.

"Don't get too excited," I told him as I walked away.

I dropped my phone on the floor and bent over to pick it up.

"I want you to bend me over and fuck me like this as hard as you can," I looked over my shoulder.

He nodded his head and I walked out of his office.

I told my boss that I was going to lunch early as I saw Lacy telling Frank about their one-on-one that they needed to have. He started preparing his stuff and I walked quickly the the bathroom by the conference. I was already soaked with anticipation.

Lacy and Frank went into the room first. I caught Paul just as he was about to open the door. I rubbed his cock, practically torturing him as I could tell that he was trying his all to keep it under control.

A few moments later, Lacy reappeared from the room. She gave me and look and said hello to Paul and he responded back quickly.

Lacy walked away and I pushed into the room, untucking Paul's shirt and reaching for his cock. He slipped my dress up my thighs gently as I closed the door behind us and locked it.

Paul must have spotted Frank because he pushed me away. Frank's eyes were wide with shock as he tried not to drop his coffee mug.

I walked over to him and he wasn't sure of what to do.

"Go? Who told you that you could leave? I want your cock in my mouth; I know it's nice," I reached for his zipper and had his cock out before he could respond.

"But I have a gi-," he stopped once his cock was so far down my throat I could barely breathe.

He wanted it, I knew he did. I could feel Paul getting antsy.

I took my dress off and threw it on the floor.

"Paul, pound my pussy now. Frank, fuck my mouth," I ordered them.

Paul bent me over the conference table, knocking the wind from me, as Frank shoved his thick cock back into its right place down my throat.

And then they switched.

Frank fucked me harder than I thought he could. Tears were streaming from my eyes as Paul's thicker, fatter cock choked me.

He teased me a little by putting his fingers in my pussy and rubbing my clit. His stroke was perfect.

Paul started sucking my breasts gently, ever so slightly nibbling my nipple to throw me off guard.

My phone started to sound from my alarm. Ten minutes left. I could either stop them and go to the bathroom or, well, I'm not going to do that.

I made Paul lay on the tablet as I got on top of him, laying down with my back to his stomach.

Frank shoved Paul's cock in me and then slid his in right after. They both fucked my pussy raw.

My alarm went off again. Five minutes. I came.

Frank pulled out and licked my clit as Paul kept fucking me.

I could die right now. I really could and I'd be in fucking heaven.

Therein, I may have been late coming back from lunch. 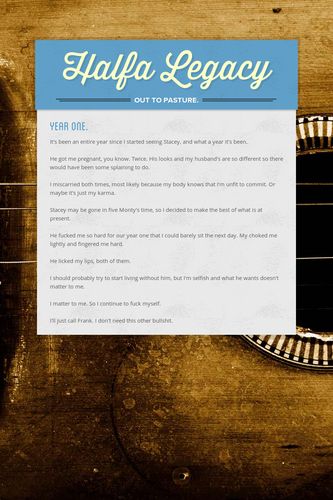 smore.com
It's been an entire year since I started seeing Stacey, and what a year it's been. He got me pregnant, you know. Twice. His looks and my...