Fountain pens are not like normal pens they were made by a person named Lewis E. Waterman 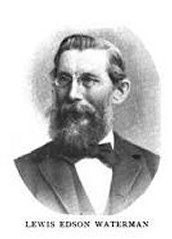 the invention of the fountain pen!!!

The fountain pen's design came after a thousand years of using quill-pens. Early inventors observed the apparent natural ink reserve found in the hollow channel of a bird's feather and tried to produce a similar effect, with a man-made pen that would hold more ink and not require constant dipping into the ink well. However, a feather is not a pen, only a natural object modified to suit man's needs. Filling a long thin reservoir made of hard rubber with ink and sticking a metal 'nib' at the bottom was not enough to produce a smooth writing instrument. Lewis Waterman, an insurance salesman, was inspired to improve the early fountain pen designs after destroying a valuable sales contract with leaky-pen ink. Lewis Waterman's idea was to add an air hole in the nib and three grooves inside the feed mechanism.

A mechanism is composed of three main parts. The nib, which has the contact with the paper. The feed or black part under the nib controls the ink flow from the reservoir to the nib. The round barrel that holds the nib and feed on the writing end protects the ink reservoir internally (this is the part that you grip while writing).

All pens contain an internal reservoir for ink. The different ways that reservoirs filled proved to be one of the most competitive areas in the pen industry. The earliest 19th century pens used an eyedropper; by 1915, most pens had switched to having a self-filling soft and flexible rubber sac as an ink reservoir. To refill these pens, the reservoirs were squeezed flat by an internal plate, then the pen's nib was inserted into a bottle of ink and the pressure on the internal plate was released so that the ink sac would fill up drawing in a fresh supply of ink.

There are nine standard nib-sizes, with three different nib-tip cuts: straight, oblique and italic. The early inks caused steel nibs to quickly corrode and gold nibs held up to the corrosion. Iridium used on the very tip of the nib replaced gold because gold was too soft. Most owners had their initials engraved on the clip. It took about four months to break in a new writing instrument since the nib was designed to flex as pressure was put on it (allowing the writer to vary the width of the writing lines) each nib wore down accommodating to each owner's own writing style. People did not tend to loan their fountain pens to anyone for that reason.

The ink cartridge introduced around 1950 was a disposable, pre-filled plastic or glass cartridges designed for clean and easy insertion. They were an immediate success. The introduction of the ballpoints, however, overshadowed the invention of the cartridge and dried up business for the fountain pen industry. Fountain pens sell today as a classic writing instrument and the original pens have become very hot collectibles. 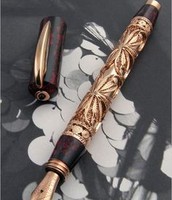 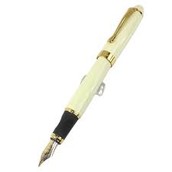