Jaymee is using Smore newsletters to spread the word online.

Get email updates from Jaymee:

The Ordovician lasted almost 45 million years ago, beginning 488.3 million years ago and ending 443.7 million years ago. During this period, the area north of the tropics was almost entirely ocean, and most of the world's land was collected into the southern supercontinent Gondwana. Throughout the Ordovician, Gondwana shifted towards the South Pole and much of it was submerged underwater. 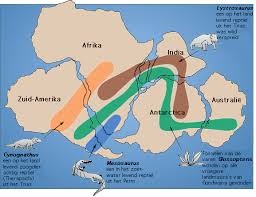 Beginning: During the Ordovician, most of the world's land — southern Europe, Africa, South America, Antarctica, and Australia — was collected together in the super-continent Gondwana. Throughout the Ordovician, Gondwana moved towards the South Pole where it finally came to rest by the end of the period. In the Lower Ordovician, North America roughly straddled the equator and almost all of that continent lay underwater. By the Middle Ordovician North America had shed its seas and a tectonic highland, roughly corresponding to the later Appalachian Mountains, formed along the eastern margin of the continent. Also at this time, western and central Europe were separated and located in the southern tropics; Europe shifted towards North America from higher to lower latitudes.
Middle: During the Middle Ordovician, uplifts took place in most of the areas that had been under shallow shelf seas. These uplifts are seen as the precursor to glaciation. Also during the Middle Ordovician, latitudinal plate motions appear to have taken place, including the northward drift of the Baltoscandian Plate (northern Europe). Increased sea floor spreading accompanied by volcanic activity occurred in the early Middle Ordovician. Ocean currents changed as a result of lateral continental plate motions causing the opening of the Atlantic Ocean. Sea levels underwent regression and transgression globally. Because of sea level transgression, flooding of the Gondwana craton occurred as well as regional drowning which caused carbonate sedimentation to stop.
Nearing the end: During the Upper Ordovician, a major glaciation centered in Africa occurred resulting in a severe drop in sea level which drained nearly all craton platforms. This glaciation contributed to ecological disruption and mass extinctions. Nearly all conodonts disappeared in the North Atlantic Realm while only certain lineages became extinct in the Midcontinental Realm. Some trilobites, echinoderms, brachiopods, bryozoans, graptolites, and chitinozoans also became extinct. The Atlantic Ocean closed as Europe moved towards North America. Climatic fluctuations were extreme as glaciation continued and became more extensive. Cold climates with floating marine ice developed as the maximum glaciation was reached.

From the Lower to Middle Ordovician, the Earth experienced a milder climate. The weather was warm and the atmosphere contained a lot of moisture. Though, when Gondwana settled on the South Pole during the Upper Ordovician, massive glaciers formed, causing shallow seas to drain and sea levels to drop. This caused mass extinctions that characterize the end of the Ordovician in which 60% of all marine invertebrate genera went extinct. The layers of rock that were the Ordovician are characterized by numerous and diverse trilobites and conodonts (phosphatic fossils with a tooth-like appearance) found in sequences of shale, limestone, dolostone, and sandstone. Also, blastoids, corals, and crinoids, as well as many kinds of brachiopods, snails, and clams, appeared for the first time in the geologic record in tropical Ordovician environments. Remains of ostracoderms (jawless, armored fish) from Ordovician rocks comprise some of the oldest vertebrate fossils. Shallow seas covering much of Gondwana became breeding grounds for new forms of trilobites after global patterns of life changed. Many species of graptolites went extinct, but the first planktonic graptolites appeared. In the late Lower Ordovician, the diversity of conodonts decreased in the North Atlantic Realm, but new lineages appeared in other regions. Seven major conodont lineages went extinct, but were replaced by nine new lineages that resulted from a major evolutionary radiation. 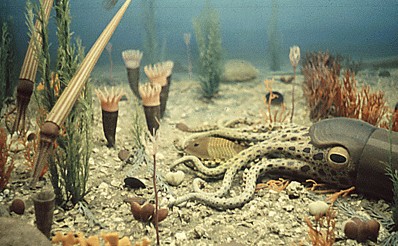 The Ordovician was named by the British geologist Charles Lapworth in 1879. He took the name from an ancient Celtic tribe, the Ordovices, renowned for its resistance to Roman domination. For decades, the epochs and series of the Ordovician each had a type location in Britain, where their characteristic faunas could be found, but in recent years, the stratigraphy of the Ordovician has been completely reworked. Graptolites, extinct planktonic organisms, have been and still are used to correlate Ordovician strata. 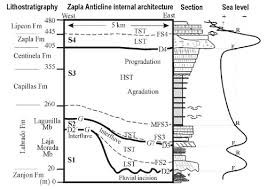 Nautiloids: like Orthoceras were among the largest predators in the Ordovician .... 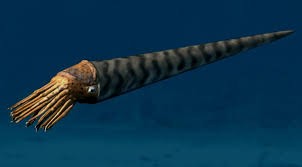 Ostracoderms: Reconstruction picture of a fish typical of the Ordovician period, the armored genus Hemicyclopsis. These types of fish, known as ostracoderms, did not have jaws. Their closest living relatives are the lampreys and 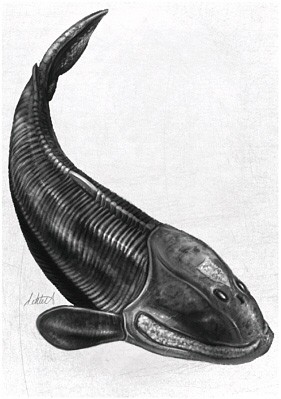 Jaymee is using Smore newsletters to spread the word online.