Maximilien Robespierre was born May 6th 1758 and lived until July 28th 1794. He lived his life as a lawyer and politician at first and would gain his influential lifestyle by being the head of the Committee of Public Safety. Maximilien started the Reign of Terror to get rid of the corrupt people in France and anyone around the world who opposed his movement in the French Revolution from 1793-1794. Maximilien also gained an influence on his name by being under command of the execution of King Louis XVI, to open up a window for the Revolution to really make a change in the country.

Maximilien was the leader of a powerful group in the French Revolution that was called the Jacobin's who were all for the revolution and getting rid of anyone who opposed their movement. He was incorruptible and stuck with his beliefs which shown proof by him being the leader of the Committee of Public Safety who was in control of the Reign of Terror on how he wanted France to change.

"Citizens, did you want a revolution without revolution?" Maximilien said this because he was changing things in the country by making mass murders with the guillotine during the Reign of Terror and the country didn't like his movement so did the country really want change or not? 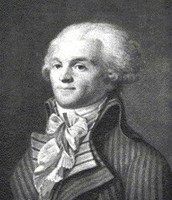