grace is using Smore newsletters to spread the word online.

Get email updates from grace:

The followers of Islam are called Muslims. Muslims believe that there is only 1 god. this is the god of Abraham. Muslims celebrate Ramadan. Ramadan is the name of the 9th month of the Islamic calendar. During Ramadan, people don't eat or drink ( also known as fausting ) And Muslims Learn how to be thankful and how they can improve ourselves. Also during Ramadan Muslims give to charity to help the poor people. People prey during Ramadan to be forgived, to be thankful and to help the poor people.During Ramadan, people wear white to show equality. Friday is also important to muslims because it is their day of worship. On Friday, muslims go to the Mosque to prey and worship .worships are lead by a Imam. when they prey, people must face the Kaaba. the Kaaba is a black box in Mecca. Mecca is the holiest city in the religon of Islam.

this is the Kaaba. when Muslims prey, they have to face the Kaaba. The Kaaba is located in Mecca the holiest city in the religon of Islam.

mecca is the holiest city in the religon of Islam. this is where the Kaaba is located.

this is where Muslims worship of Fridays

this is the Imam. The imam is the wordhip leader. 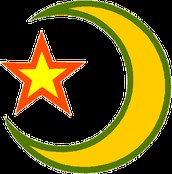 this is how Muslims pray

grace is using Smore newsletters to spread the word online.