Uranium - It's the Bomb!

Weighing Down the Table Since 1789

Uranium - It's the Bomb!

Weighing Down the Table Since 1789 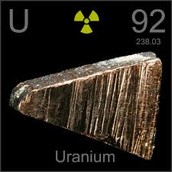 An Intro to Uranium

Uranium, also known as U, has an atomic structure of 92 protons, 143 neutrons, and 92 electrons. Out of those 92 electrons, 2 are valence electrons. The element has 7 atomic orbitals since it's located in period 7 of the periodic table. Uranium does not have a group number.

How was Uranium discovered?

Uranium was discovered in 1789, in Berlin, Germany by Martin Heinrich Klaproth. Klaproth was studying the mineral pitchblende, which was then believed to be a zinc/iron ore. He dissolved it in nitric acid, and added potash to create U. Klaproth concluded that he had founded a new element, and he named it after the recently discovered planet Uranus. 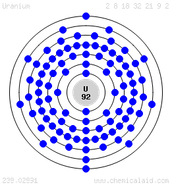 Characteristics and Properties of Uranium

Uranium, is a silvery white and weakly radioactive metal. It is malleable, ductile, somewhat paramagnetic, heavily electropositive and a poor electrical conductor. This metal reacts with most non-metals another compounds , with a reactivity that increases with temperature.

Where can it be found?

Uranium can be found in topsoil anywhere on the planet as well as in the mantle it can also be found as part of a lot of different minerals such as granite. Rarely found in its pure form, uranium ore is the main source of uranium so scientists are looking for cheaper ways to process it from the soil. Until then, uranium ore can be found in mines in Canada, Russia, and in Sub-Saharan Africa.

What is uranium used for?

Uranium, a natural chemical element, is used in kinetic energy penetrators and armor plating. It is also used as a colorant in uranium glass , generating orange-red to lemon yellow tones.

How did Uranium get it's name?

Martin Heinrich Klaproth, the founder of uranium named this element after the planet Uranus in 1789.