Important Things He Did

James W. Farnham The Second served in World War 1. He was a soldier who fought in WW1 in the US army.

Weapons that were used in WW1 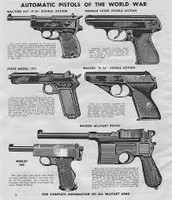 These are some automatic pistols from WW1. Pistols were secondary weapons which means if the rifle ran out of ammo they could use a pistol.

Tanks were used a lot in WW1. This is an American WW1 tank.

His birthday is unknown to me and my family it was a very long time ago so we can not remember when.

I am pretty sure he lived in Kansas or Missouri.