Makinley is using Smore newsletters to spread the word online.

Get email updates from Makinley:

}Sea stars are invertebrates related to sea urchins, sea cucumbers and sand dollars, which are all echinoderms. Echinoderm means spiny skin—a reference to their hard, calcified skin, which helps to protect them from predators.

}Sea stars have rows of tiny tube feet extending from the grooved surface on their underside. These tube feet allow them to crawl along the ocean floor via suction created by an internal water-driven hydraulic system. These animals also have an amazing ability to regenerate arms when they are severed, or even a new body in some species. All of their vital organs are located in the arms, so a portion of an arm could potentially grow a whole new sea star.

}There are close to 2,000 species of sea stars in the world’s oceans. Most species have five arms, but some have many more—even as many as 40! At the Aquarium, you can see 10 species of sea stars throughout the exhibits. Look closely in the Kelp Forest to spot the sun sea stars, which sport 20 arms each!

starfish are marine invertebrates. They typically have a central disc and five arms, though some species have more than this. The amoral or upper surface may be smooth, granular or spiny, and is covered with overlapping plates.

Many species are brightly coloured in various shades of red or orange, while others are blue, grey or brown.

The gut of a starfish occupies most of the disc and extends into the arms. The mouth is located in the centre of the oral surface, where it is surrounded by a tough peristomial membrane and closed with a sphincter.

}Sea stars are mostly carnivorous and prey on mollusks—such as clams, mussels, and oysters—which they pry open with their suction-cupped feet. At the Aquarium, we feed some of our sea stars pieces of fish and shrimp, but the majority of our sea stars feed on detritus, which helps to keep our exhibits clean.

}Sea stars have a peculiar way of eating. They actually digest their prey outside of their bodies by extruding their stomach out through their mouth and enveloping the prey item. When the meal is digested, the stomach is drawn back into the body. 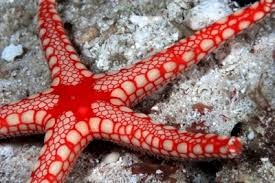 }Many different animals eat sea stars, including fish, sea turtles, snails, crabs, shrimp, otters, birds and even other sea stars. Though the sea star’s skin is hard and bumpy, a predator can eat it whole if its mouth is large enough. Predators with smaller mouths can flip the sea star over and eat the softer underside.

Makinley is using Smore newsletters to spread the word online.