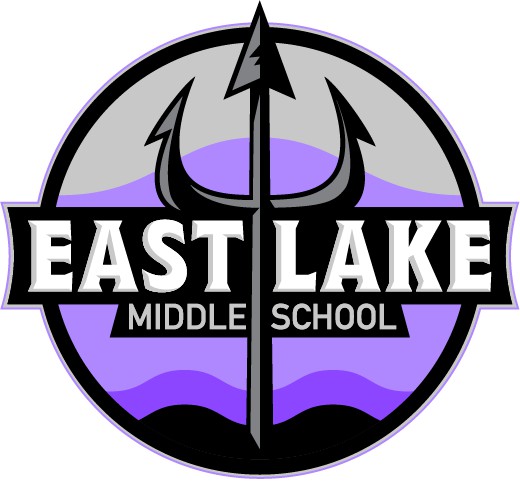 Easter is using Smore newsletters to spread the word online.

Get email updates from Easter:

Be Kind ~ Be Awesome ~ Make The Right Choices

Be Kind ~ Be Awesome ~ Make The Right Choices

February is African-American History Month. This month-long celebration is to honor the accomplishments of many African-Americans that are integral to our nation's history and to pay tribute to those who fought hard to ensure that African-Americans have the same rights as all other Americans. 2021 began with the inauguration of the first African-American/Asian/Woman Vice President in Kamala Harris. We celebrate this historic milestone in honor of those who came before her and laid the groundwork ahead so that Vice President Harris can finally break the glass ceiling. Harriet Tubman, known as “Moses,” decided to escape slavery and became an abolitionist using a network called the Underground Railroad. Rosa Parks, aptly named as the “First Lady of Civil Rights” refused to give up her seat in the front of the bus to a white man. Ruby Bridges, at six years old, became the first black student to enter an all-white school to begin the mandated desegregation of schools. Shirley Chisholm, the first black woman elected to Congress, also became the first Black presidential nominee in 1972. These women understood that while they may not be alive to see the inauguration of Vice President Harris, they all knew and understood the courage they displayed in their actions would have long term effects on changing the status quo for African Americans. Former Congressman John Lewis said this, “Take a long, hard look down the road you will have to travel once you have made a commitment to work for change. Know that this transformation will not happen right away. Change often takes time. It rarely happens all at once. In the movement, we didn't know how history would play itself out.” The fight for equality and rights is still alive as we begin the third decade of this millennium. We cannot sit out this fight as it will take all of us to transform systems that were designed to separate. Families, start this month by discussing the importance of celebrating African-Americans in the month of February..

Our Triton trait for February is ENTHUSIASM. What a perfect word. We must do everything we can to ensure that our children maintain their enthusiasm in everything they do. Ralph Waldo Emerson said, "Enthusiasm is the mother of all effort, and without it, nothing great was ever achieved." Enthusiasm drives us through failures, obstacles and listlessness of life. Let's have a discussion with our children about what it takes to remain enthusiastic in all aspects of life. Gordon Parks, the first African-American to produce and direct motion pictures said this of enthusiasm, "Enthusiasm is the electricity of life, How do you get it? You act enthusiastic until you make it a habit." Being enthusiastic means that we always see the possibility of a positive outcome. Let's teach our children that.

Finally, this week is Counselor Appreciation Week. Students, we want to shower our counselors with lots of love from you. Click on this link to send a message, video or picture for your counselor.

Please make sure that you read the email in its entirety as there are announcements and information that may required you to complete a task.

Let's have an amazing week! 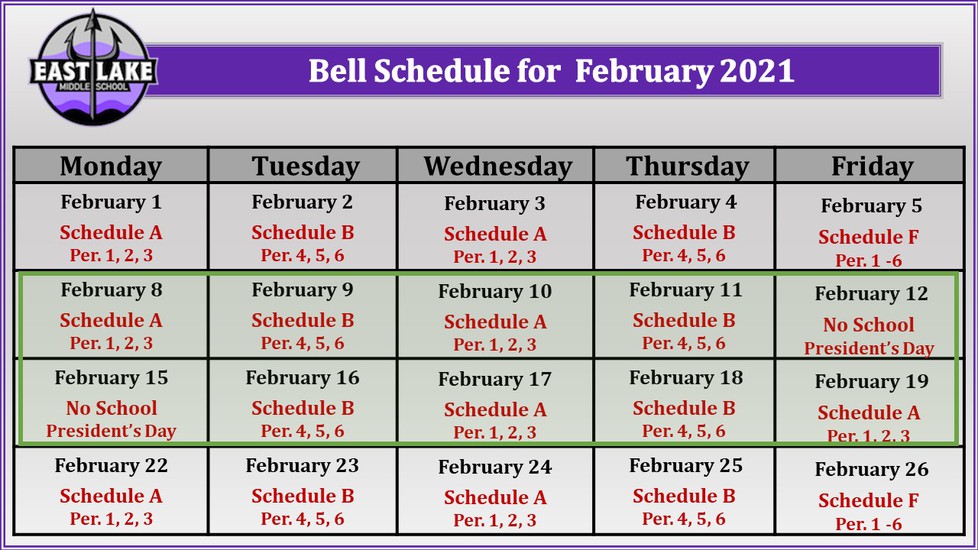 Due to the high COVID rates, we are not able to have a celebratory drive-through. Below is the video recognition of all students who received a 3.75 GPA for Semester 1. We will also be mailing the certificates to you. Congratulations!!

Students, click on the title bar to submit a thank you note, video or picture for your counselor. 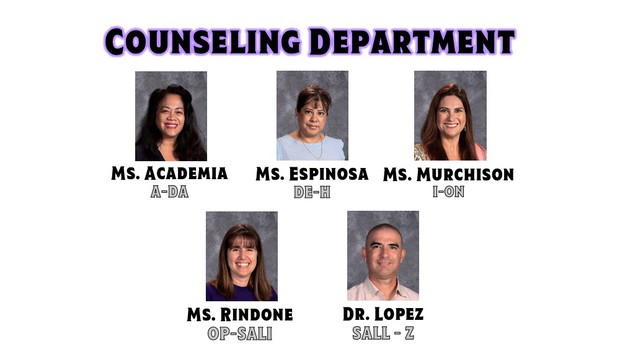 ELM Teacher of the Year 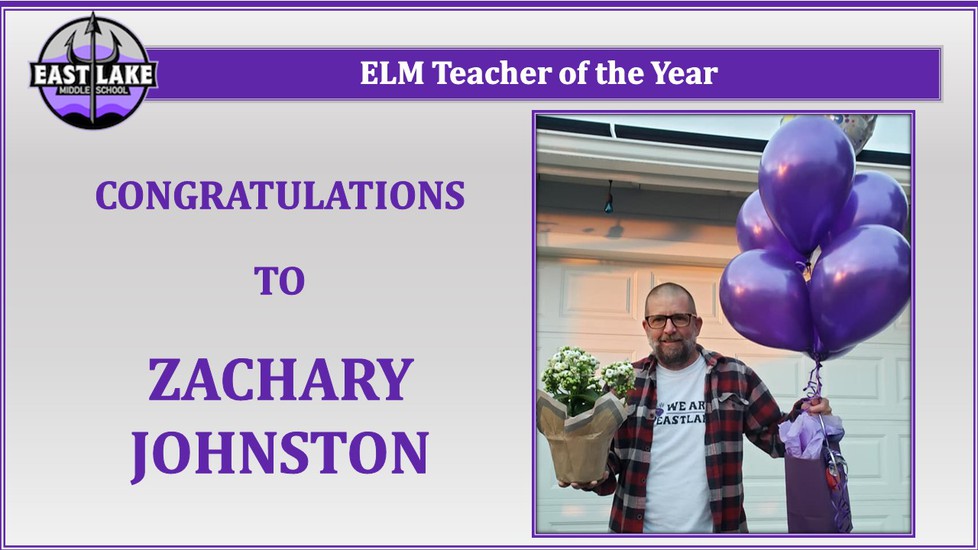 Click on the title bar to submit your photo.

Parents, We Need Your Help!

To date, out of 1600 students, here are the number of submissions:

On Friday, February 5, PE classes will provide time to have their students submit pictures if they have not done so already. If your child does not plan on submitting a photo, please let Ms. Bolles know. Her email is heather.bolles@sweetwaterschools.org. 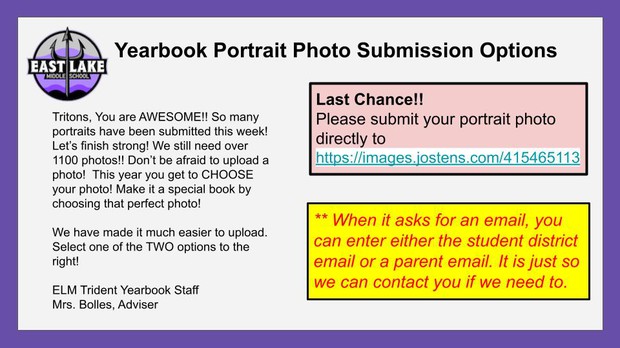 Don't wait to ask for help in math. Start now. See the links and times below for Math Tutoring in both 7tth and 8th grades. As soon as we secure teachers for other subject ares, we will offer virtual tutoring for them also. 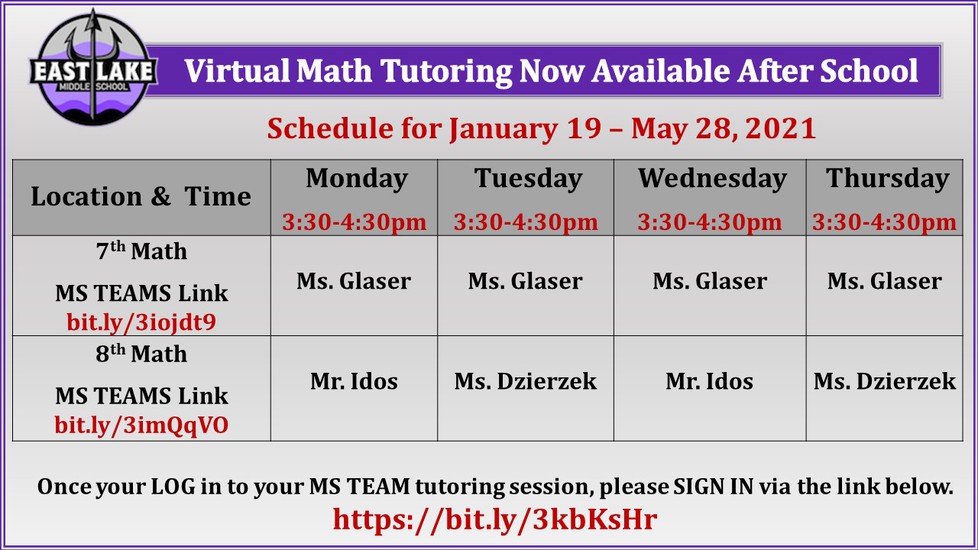 Below is the tentative in-person support that ELM will provide. 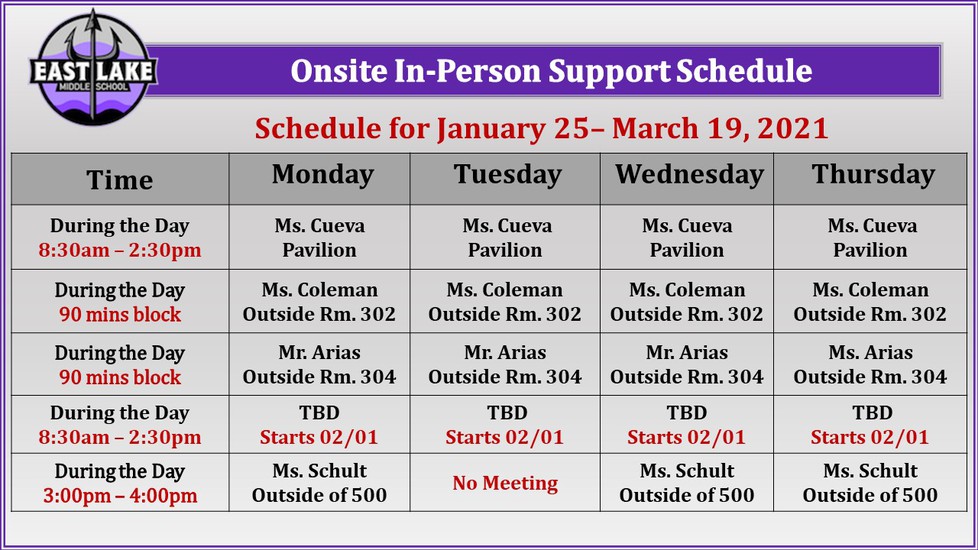 Artist of the Week

This week we have several artists of the week! At the end of first semester, Triton artists worked hard on their figure drawing projects-- many of them had never attempted realistic figure drawings before. And they came out great! 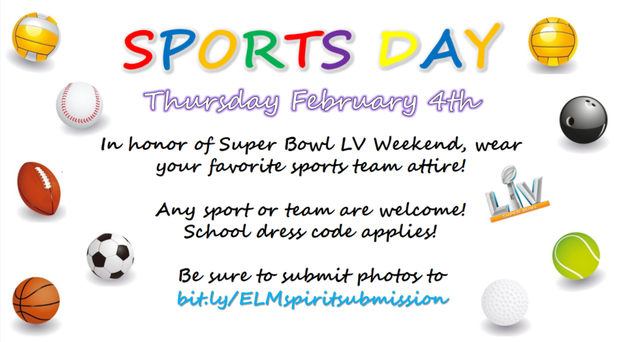 The Triton Trait for February is ENTHUSIASM. Let us never forget to live life with fervor! 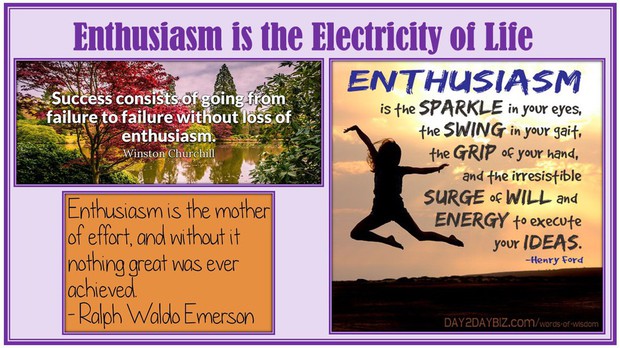 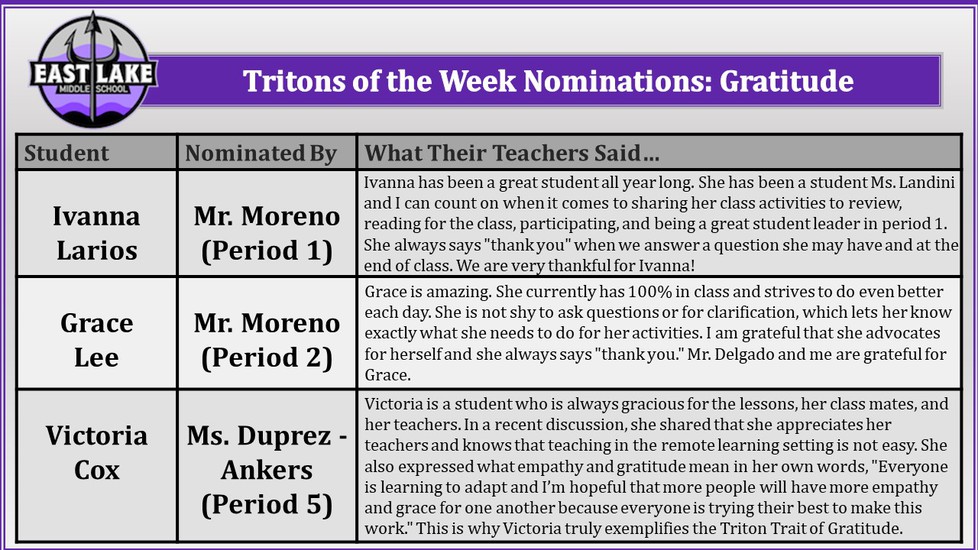 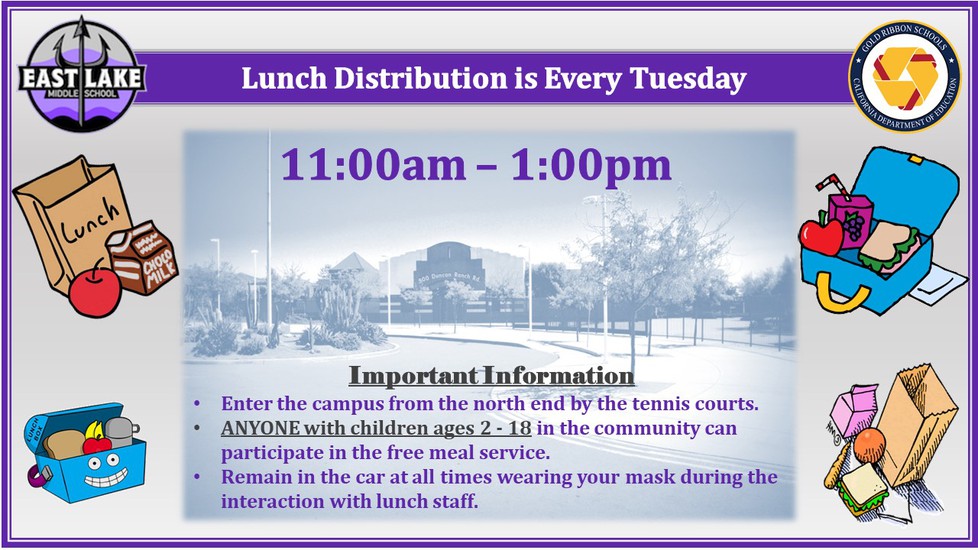 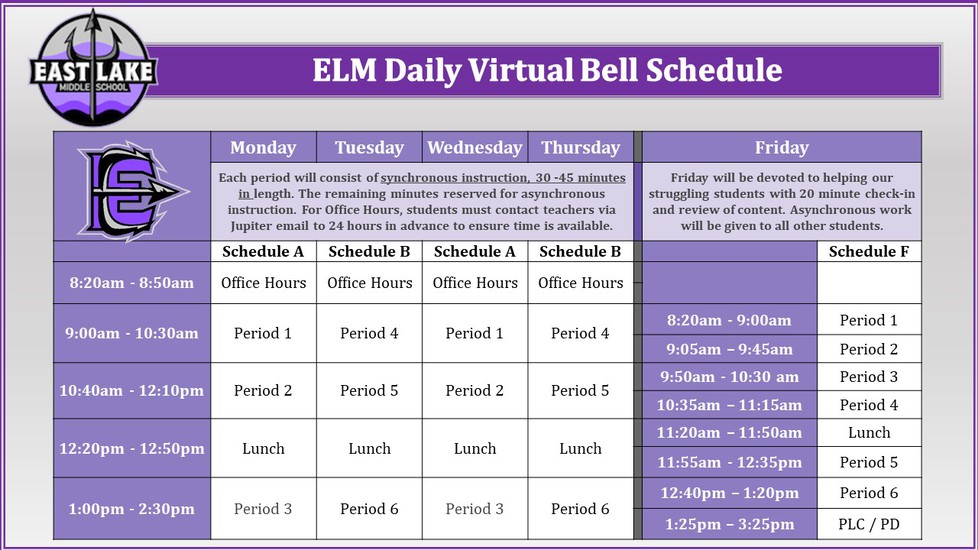 Click on the title bar to access the form to submit a change is your student's attendance.

If you would like to request additional support from our restorative practice team, click on the title bar to fill the form.

Do you need technology help. Genius Bar is available from 3:30pm - 4:30pm. Complete the form by clicking on the title bar. A Genius Bar Teacher will call you. 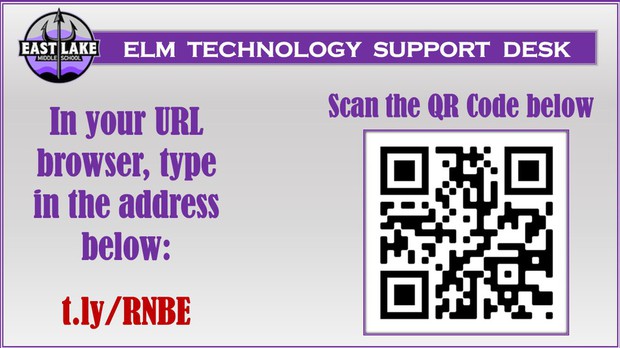 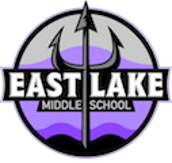 Easter is using Smore newsletters to spread the word online.

Follow Easter Finley
Contact Easter Finley
Embed code is for website/blog and not email. To embed your newsletter in a Mass Notification System, click HERE to see how or reach out to support@smore.com