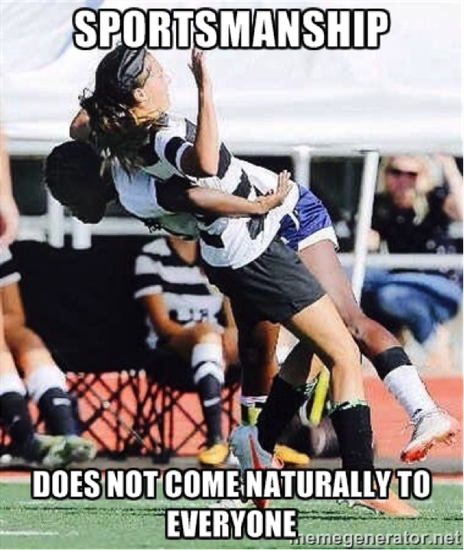 Hall’s meme produced in 2015 for Portfolio two, addresses the issue of bad sportsmanship in High School athletes. The picture shows one of the girls tackling the other player, when the ball is clearly not in play. This appeals to logos because the picture supports the claim that there is an issue of bad sportsmanship. The picture can also appeal to pathos because no one likes to see people play dirty, and it often makes people upset. The words printed such as, “Does not come naturally to everyone,” indicate in a sarcastic way that they player in the picture obviously has a problem with keeping their cool. The words in the print can also appeal to pathos because the words are meant to be humorous, and humor appeals to the audience. The ad is intended to be sarcastic to show how ridiculous bad sportsmanship is in High School sports.

In the video, "Eian's Corner" produced and edited by Rick Schmidt, the issue of sportsmanship is addressed-- specifically on the High School level. In the video, examples of poor sportsmanship from high school basketball games are used to enhance the viewer's experience and understanding. In the brief public service announcement, these real life examples give credibility to the message-- this is an appeal to ethos. Humor is used continuously throughout the video, pulling and intriguing the audience into what's being said-- this is generally an appeal to pathos. Funny faces, goofy side clips, and sarcasm emotionally keep the audience connected. The video is intended to reach audiences involved in, and around High School sports. With humor the viewers are informed about the issue of sportsmanship.