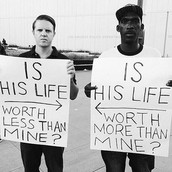 Black people are being treated unfairly.This is something that has been going on for a really long time and respect is long overdue.Because of racism and hatred people are dying.This issue is VERY controversial because some people don't want to approach it or ignore it.Others want to fight until the madness is over.However this is something that can't be ignored because it's been going on for so long.(4)

How does Donald Trump feel about the issue?What about the republicans?

Donald Trump turns the blame on #blackmatter itself.He blames the organization for being, "a fuselighter in the assasinations of these police officers."(CNN Naomi Lim/Jeremy Diamond) However, it's the other way around.Black people are being killed everyday because the some of the police assume that they are trouble and instead of following what they are supposed to do, they just shoot, then get away with it without a strong enough punishment.Trump isn't doing much but adding fuel to the fire.He doesn't understand what it's like to be a black individual in America and what they have to face.The republics don't really know how to deal with the whole situation.However whatever they choose to do will affect the black people voting this year.(1) (2)

How is Hillary going about the problem?What about the Democrats?

Hillary Clinton is willing to fix a lot of problems that will benefit many people.She wants to go against racism.Howe ver she hasn't been supportI've in the past she owns up to her mistake by saying,"Looking back I should not have used those words, and i wouldn't use them today."(ThinkProgress.com)She did say something that weren't ok but she's willing to fix it.Ulike Donald Trump she's trying to change for the bette.The democratic party is doing the best they can of preventing racial issues(3)(5)

I am a young black girl in America.I observed that people who look simular to me are being killed and discriminated because of where they are from and what they look like.I have a deep understanding about how other blacks feel about constant oppression and disrespect.It's unfair that we (like everyone else) have helped build this country for so long and we STILL don't get any respect for it as a race. A lot of people think this movement is pointless.However they do not understand what we have to go through.They are too uneducated and ignorant to actually know what's going on and how negative it is.They don't even bother to put themselves in our shoes.This isn't just about Black people it's about everyone working together to end hatred.We are defending ourselves by protesting.No one said black people are higher or more important.Itso about everyone.