Get email updates from Garrett:

The God of Wine, Merriment, and Theater

The God of Wine, Merriment, and Theater 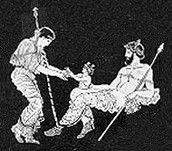 "Dionysus was the son of Zeus and Semele, a daughter of Cadmus (king of Thebes). Out of jealousy, Hera, the wife of Zeus, persuaded the pregnant Semele to prove her lover’s divinity by requesting that he appear in his real person. Zeus complied, but his power was too great for the mortal Semele, who was blasted with thunderbolts. However, Zeus saved his son by sewing him up in his thigh and keeping him there until he reached maturity, so that he was twice born. Dionysus was then conveyed by the god Hermes to be brought up by the bacchantes (maenads, or thyiads) of Nysa, a purely imaginary spot" (Encyclopedia Britannica). 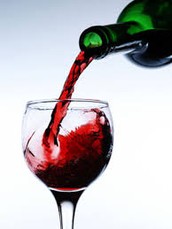 Dionysus' impact on the real world

"Homer describes the god as the ‘joy of men’ and Hesiod likewise describes him as ‘much-cheering’. This is no doubt because Dionysus is credited with giving man the gift of wine. The god gave Ikarios, a noble citizen of Ikaria in Attica, the vine tree. From this, Ikarios made wine which he shared with a group of passing shepherds. However, unaware of the stupefying effects of wine, the shepherds thought they had been poisoned and so swiftly took revenge and killed the unfortunate Ikarios. Notwithstanding this inauspicious start to the wine industry, wine became an extremely popular drink in antiquity. The Greeks usually drank wine diluted with water (one part wine to three parts water), mixed in a large krater vessel. Wine was drunk at banquets, festivals, and private parties, in particular, at a symposium, a kind of informal, male-only drinking session where guests reclined on a couch (kline) and engaged in conversation on topics ranging from gossip to philosophy"(Ancient History Encyclopedia). 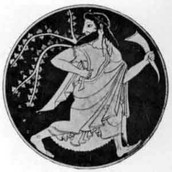 Dionysus wandered through many lands, teaching men the culture of the vine and the mysteries of his cult. He was followed by an entourage of satyrs, sileni, maenads, and nymphs. Many festivals were held in honor of Dionysus; most famous were the Lesser or Rural Dionysia (in late December), the Greater or City Dionysia (in late spring), the Anthesteria (in early spring), and the Lenaea (in winter). His characteristic worship was ecstatic and women were prominently involved. Votaries, through music, dancing, and drinking, and through eating flesh and blood of sacrificial animals, attempted to merge their identities with nature. Later, however, the worship of Dionysus became more formalized and calm. It was believed that not only could he liberate and inspire man through wine and ecstatic frenzy, but he could endow him directly with divine creativity. Dionysus thus came to be considered a patron of the arts. He was variously represented as a full-grown bearded man, as a beast, and as a delicate, effeminate youth. The Romans identified him with Liber and with Bacchus, who was more properly the god of wine" (Columbia Electronic Encyclopedia).