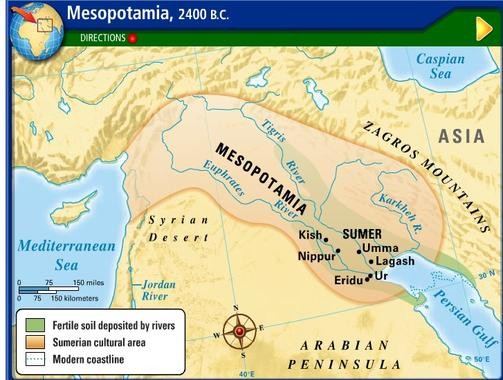 Mesopotamia was an ancient civilization that was ruled by many empires. Mesopotamian's culture is very different from ours today. They had a different form of writing, and are responsible for many things we use today.

Mesopotamians invented things that we use alot. One thing Mesopotamians invented is the wheel. And like I said before, we use it alot. When they created the wheel they used it mainly for pottery. (You know those things that spin when people make pots out of clay?) they also used it for horse-drawn chariots in battle. They also used it for wagons. Then, ALOT of time passes and someone invents the care. Just think of Mesopotamians when your eating food from a drive-thru window.

Mesopotamians did mathematics like we do today. Except their numbers only went up to 60. They also wrote in a different form of writing that they invented called cuneiform. But I'll talk about that later. In school only boys could go. If kids didn't get their math right the first time, the teachers beat them! If you think your teachers are bad, think again...

Mesopotamian's form of writing is called cuneiform. Cuneiform is wedge shaped with alot of triangles. To see how to write in cuneiform, go to this website: http://www.penn.museum/cgi/cuneiform.cgi. It tells you to write your full name and your initials and poof! It shows what it looks like in cuneiform! Go ahead and try it!

Mesopotamian's planted crops such as peas, lentils, wheat, barley, and chickpeas. Mesopotamian has two rivers around it (Euphrates and Tigris river). Mesopotamians used this to their advantage by using a system called irrigation. Irrigation is a system that brings water from large bodies of to farmer's crops. Irrigation used waterways and pipes.

Follow Isaac Belcher
Contact Isaac Belcher
Embed code is for website/blog and not email. To embed your newsletter in a Mass Notification System, click HERE to see how or reach out to support@smore.com
close