America Soars Over the British

America Soars Over the British

Impressment - British have been impressing American seamen into service and provoking Native Indian attacks in the Northwest.
War Hawks - Led by nationalists Henry Clay and John C. Calhoun, proposed an easy conquest of Canada.
Quest for more land - Thomas Jefferson requested an expedition led by Captain Meriwether Lewis and William Clark to chart out the territory from the Missouri River to the Pacific Ocean, find resources, and establish good relations and trade with the Native Indians.

Detroit - 2,000 American troops surrendered to the British.
Put-In-Bay - American army captured, but Oliver Hazard Perry engaged six British ships!
Washington, D.C. - The British set flame to the White House, the Treasury Building, and the Naval Yard. President Madison and his wife managed to evacuate beforehand and saved many of our national treasures - like the Declaration of Independence.
Baltimore - British ships fired on Fort McHenry. Lawyer Francis Scott Key had been detained on a British ship, but Americans drove back British attack!
New Orleans - The British attack. We were out numbered, but our diverse army proved strong and stopped the invasion! 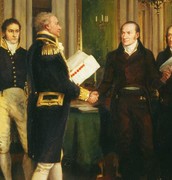 The Treaty of Ghent

The Treaty that ended the War of 1812. British troops were removed from the Old Northwest, ending their attempts of Native Indian resistance to settlers.

Took advantage of the war to suppress the Native Indian resistance. He defeated the Red Stick faction of the Creeks at Horseshoe Bend, and had them sign a treaty give two-thirds of the remaining Creek lands to the United States.
Next, he and his troops went to New Orleans, securing our victory.

Federalist delegates gathered to discuss the War of 1812's impact on their economy in their New England home states. They proposed amendments discussing subjects like their concerns of embargoes and the three-fifths compromise. However, this was eliminated when the news of Andrew Jackson's victory in New Orleans spread.

Effects of the War Through Civilian Eyes

The cost of war was a scary thought, especially in the beginning when our attempts in battle were failures. However, even being out numbered, our troops began to show strength against Britain's much larger army. Everyone grew more patriotic and we felt closer as a nation. We were building a unique sense of spirit in our military and making it stronger by adding a diversity of men. This was the beginning of something. Because of materials or battles we've lost, it caused a whole new turn around in manufacturing as well as building for transport, which could also support our military if a cause were to arise.