The History of the plasma car

It was a plastic car designed for kids. It became popular in Canada. Then it became modified for adult use.
Plasma Cars

The Science Behind the Plasma Car

The Plasma Car design includes 6 wheels, but only 4 touch the ground. The 2 wheels located at the front of the vehicle don't touch the ground or spin, they are merely there for stability. Next set of wheels of the Plasma Car are attached to the steering wheel by a lever, in such a way that they are located behind the axis of rotation of the steering column. The torque applied to the steering wheel causes a friction force by the wheels on the ground, a force parallel to the axle and perpendicular to the direction the wheels are rolling. If a component of this force points to the rear of the car, the reaction force of the ground on the car points partly forward and accelerates the car. This is the force that drives the car forward and it ultimately comes from the force exerted on the handlebars.In line skaters make a similar force by repeatedly pulling both skates laterally inward in a criss cross fashion in order to accelerate themselves. Skateboarders do a similar thing by pulling laterally inward while executing a series of alternating, tight turns. The final set of wheels spin normally, but do not pivot. 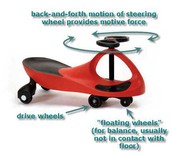 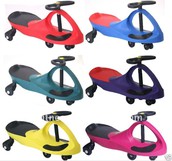