Nine Dogs and the Role of Violence

Nine Dogs and the Role of Violence

The Nine Dogs and the Role of Violence

The Nine Dogs are puppies who Napoleon took them from their parents Jessie and Bluebell, claiming he would be "responsible" for their education. The dogs are a direct allusion to the NKVD, Stalin’s secret police force. The NKVD came to have an enormous role in Soviet life in the 1930s and 1940s. They proved their reach in 1940 when Trotsky (a.k.a. Snowball) was assassinated in Mexico by Ramón Mercado, a NKVD agent. During the "purges," the secret police helped Stalin round up all those members of Soviet society that were perceived as a threat, and the NKVD participated in their exiles and executions. In short, the secret police, like the nine dogs, was the violent force that allowed Stalin to remain in power.
In both Animal Farm and Stalin's era in the Soviet Union, violence played a big part in controlling the state.

The Nine Dogs played a very important part in Animal Farm, they represented Napoleons corrupt intentions and the force that keeps others in line. They were the violent force that kept Napoleon in power by getting rid of competition and silencing anybody that might have stood up otherwise.

"And even the miserable lives we lead are not allowed to reach their natural span. For myself I do not grumble, for I am one of the lucky ones. I am twelve years old and have had over four hundred children. Such is the natural life of a pig. But no animal escapes the cruel knife in the end. You young porkers who are sitting in front of me, every one of you will scream your lives out at the block within a year. To that horror we all must come– cows, pigs, hens, sheep, everyone. Even the horses and the dogs have no better fate. You, Boxer, the very day that those great muscles of yours lose their power, Jones will sell you to the knacker, who will cut your throat and boil you down for the foxhounds. As for the dogs, when they grow old and toothless, Jones ties a brick round their necks and drowns them in the nearest pond. (1.10)

Ever since the animals were under Mr. Jones’ control, violence was an important role in the farm. It is initially presented at the beginning of the story showing that violence was already a part of the animals lives. This means that they are used to experiencing it, and being manipulated by it.

“When they had finished their confession, the dogs promptly tore their throats out, and in a terrible voice Napoleon demanded whether any other animal had anything to confess.” (7.25)

This is one of the many examples of Napoleon using violence to control the animals.

Through violence he instills fear in the others, forcing their obedience to him.

3.To the amazement of everybody, three of them [the dogs] flung themselves upon Boxer. Boxer saw them coming and put out his great hoof, caught a dog in mid-air, and pinned him to the ground. The dog shrieked for mercy and the other two fled with their tails between their legs. Boxer looked at Napoleon to know whether he should crush the dog to death or let it go. Napoleon appeared to change countenance, and sharply ordered Boxer to let the dog go, whereat Boxer lifted his hoof, and the dog slunk away, bruised and howling. (7.24)

Its interesting to note that as Napoleon's corruption throughout the story increases, his violence increases. In this particular passage, the sturdy, hard-working character of Boxer is able to defeat the threat of violence. At the same time, Boxer does not realize his own power. 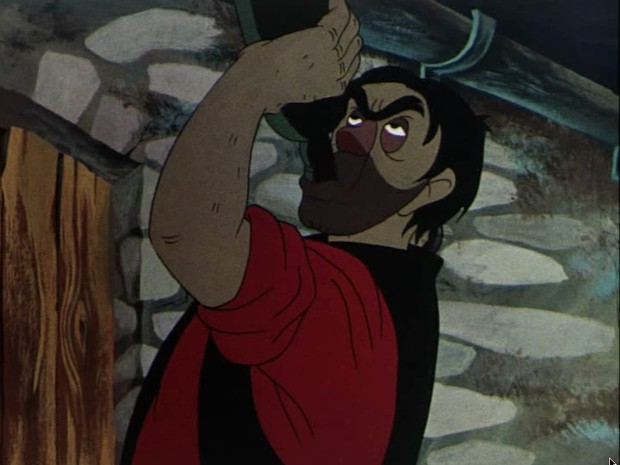 And so the tale of confessions and executions went on, until there was a pile of corpses lying before Napoleon's feet and the air was heavy with the smell of blood, which had been unknown there since the expulsion of Jones. (7.26)

The death of the animals is meant to expunge their supposed crimes- but in fact the violence represents a further moral decay on the farm. 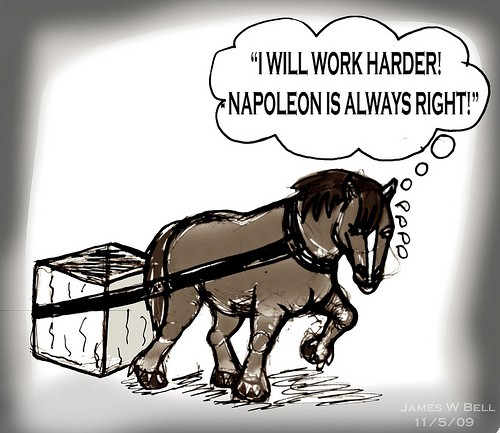 He [Snowball] was running as only a pig can run, but the dogs were close on his heels. Suddenly he slipped and it seemed certain that they had him. Then he was up again, running faster than ever, then the dogs were gaining on him again. One of them all but closed his jaws on Snowball's tail, but Snowball whisked it free just in time. Then he put on an extra spurt and, with a few inches to spare, slipped through a hole in the hedge and was seen no more. (5.14)

While violence was at first only present in conflicts between animals and humans, it eventually takes over Animal Farm and the interactions between the animals themselves.