Vikings lived during 800 A.D. to the 11th century. The Vikings were Scandinavian warriors who raided coastal areas. These areas included monasteries on the British Isles, Russia, Iceland, Greenland, and much of Europe. The Vikings were not tied as a race if ancestry, they were just best known as people who came from the present day ares of Denmark, Norway, and Sweden. The difference between Vikings and Europeans was that the Vikings came from a foreign land and they were not Christian.

The exact reason for the Viking Raids are unknown. Some believe it was due to over population of Scandinavia, but early Vikings looked for riches, not land. Scandinavians would trade furs with Europe, which helped them learn about new sailing technology. The new technology helped them travel to Europe more efficiently. This helped them have the raids on Europe.

One of the earliest attacks of the Vikings was at Lindisfarne, a monastery off the coast of Northumberland in 793 A.D. The attack marked the beginning of the Viking Age. The Vikings, who were probably Norwegians, did not completely destroy the monastery, but it shook the entire European religious world. Two years later, they attacked the monasteries on the islands of Skye, Iona, and Rathlin. In 799, the Vikings first attack on the continent of Europe was at the monastery of St. Philbert's on Noirmoutier, near the Loire River.

For many decades, the Vikings would do hit-and-run raids along the coastal targets of the British Isles and Europe. During the Mid-ninth century, Scotland, Ireland, and England became major targets for Viking raids. Vikings had gained control of the Isles of Scotland, the Hebrides, and much of Scotland's mainland. They had founded Dublin, Waterford, Wexford, Wicklow, and Limerick. Vikings had a wave of attacks on England, and Wessex was the only successful kingdom. Vikings had gained control of East Anglia and Northumberland. Wessex had begun to reconquer Scandinavian ares of Engkand during the first half of the 10th century.

Viking armies still remained active in the European continent and even attacked twins as far inland as Paris, Limoges, Orleans, Tors, and Nimes. Scandinavians began to colonize in Iceland. Some Vikings even started to move to Greenland. Leif Eriksson, a Viking, may have even been the first person to discover North America. In the mid 10th century reign of Harold Bluetooth as king had marked the beginning of a second Viking Age.

Raids had hit the coasts of Europe, especially England. Harold's rebellious son, Sven, led Vikings on raids and conquered the entire kingdom. Seven died the next year and his son Knut, was left to lead the Scandinavian empire. After Knut's death, his sons succeeded him, but we're both dead by 1042. Edward the Confessor, regained the throne from the Danish. In 1066, Harold Godwinesson gained the throne. His army was defeated during an invasion of the Vikings. In 1066, on Christmas Day, William managed to regain the throne against further Danish challenges. The events in 1066 in England marked the end of the Viking Age. 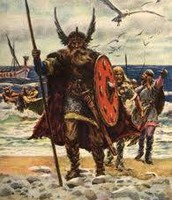 Viking during the Middle Ages 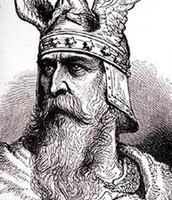 Vikings on their way to Raid 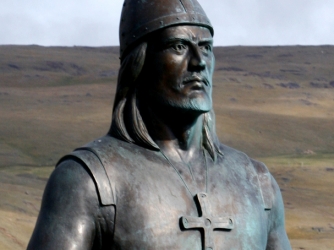