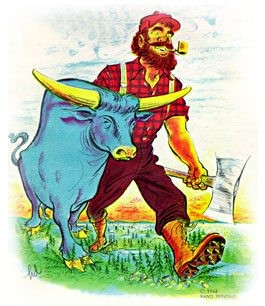 Paul Bunyan is a fictional lumberjack constantly accompanied by Babe the Blue Ox. The character originated as an oral story told by American loggers. He was first popularized to advertise the Red River Lumber Company and by newspapermen in the 1910's. His stories contain his unrealistic feats, impossible creatures, and impossible and inane weather, making them tall tales. In fact, Paul Bunyan is an impossible being himself, being described as so large he could fit into his father's clothing a week after he was born.

Despite there being several different adaptations to the stories, a few traits constantly stay the same: he has a resolve to overcome any and all obstacles in his path, impressive strength, speed and skill. However, it is resolve that is the moral of several of the Bunyan-centered stories. An example is the story 'Paul Bunyan Tames the Whistling River' and 'Paul Bunyan and the Log Jam'. The common traits of these tall tales, teaching a lesson and having a clear conflict, makes them folktales, as well as the fact that they were originally passed down orally and has strange "powers".

Paul Bunyan was born in Maine. As a child, he was constantly hungry and grew at an impossible rate. As a boy, Paul Bunyan helped his dad as a logger and had the strength of several men and was speedy. A while after meeting Babe the Blue Ox, Paul moved away from Maine to look for work in other forests. There the stories take place. Afterwards, storytellers differ when it comes to what happens to Paul Bunyan. Some say he was last seen by the Arctic Circle or moves in and out of the forest or goes to Minnesota every summer.

Babe the Blue Ox is Paul Bunyan's companion and is impossibly huge, just like him. He was discovered by Paul Bunyan in the forests, practically buried in blue snow. True to his name, Babe is blue and he is also known to have helped Paul Bunyan throughout his travels. He died later, in South Dakota, where he was buried.