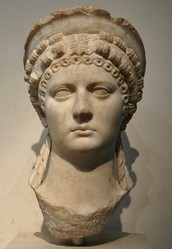 Emperors During Her Time

Nero 54-68 AD:
Octavia was married to Nero, giving her exclusive access to certain powers and responsibilities as empress.

Claudia Octavia was admired as empress by the Roman citizen body. Opposite of her husband Nero, Octavia was on the good side of the public and was well respected for her attempts to better Rome. Although she did not have a profound affect on Rome itself, she was still a good icon and served as a very good empress.