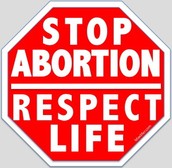 Should abortion be legal in America?

Abortion is a very controversial topic in America, and I think that abortion should be legal.

There are very many people who are against abortion for many certain reasons. One of the reasons are that they think that it is wrong to...kill their baby, or that the baby cannot have a say in what happens to them so women don't have the right to have an abortion. Also another reason is that it is not a human like thing to do. In the Roe v. Wade case, Jane Roe, the woman wanted to have an abortion but a man named Henry Wade thought that her decision to have an abortion was wrong, so he took her to court where later, they legalized abortion in the United States.

There are many people who support abortion too, like I do. I support abortion, because I think that if a woman was raped, or anything like that, and they know for sure that they did not want the baby, then I think that would be okay and only if the woman has a serious medical issue. But before they have an abortion, they should have some tests done first, they should have to go through some kind of test in order to have an abortion, and what I will be talking about next will be about the tests women should take before they have an abortion. Under a law signed by Governor Dennis Duagaard, women who want to have an abortion have to wait 72 hours, have to undergo two visits to physicians to be checked for physical and mental risks caused by an abortion, and be proselytized by an antiabortion counseling before they can have the procedure done. This is in South Dakota. I think that this should be don't, at least if abortion is going to be legal in America.

I think that people who are support women who want to have abortions have really good reasons why, and I think that maybe they support it more because they are afraid that if they make abortion illegal women will try to do it themselves, and they can either hurt or kill themselves by accident which no one wants to happen to anybody. The women who are trying so desperately to not to have the baby are putting their own lives at risk if they try to do it themselves. But other people who are against abortion could say that its a bad thing to do because they are killing the baby and it is not right to do that. they say if you don't want the baby you can at least give it up for adoption.