Cecily is using Smore newsletters to spread the word online.

Get email updates from Cecily:

WW3 & The Battle of The Bulge

Audie Murphy and his heroics

WW3 & The Battle of The Bulge

Audie Murphy and his heroics

What the Battle of The Bulge is:

The Battle of the Bulge was a battle during World War 2 in the middle of winter. It took place in Reidwihr Woods, near Hotzwhir, France. The temperature was below freezing, and the American troops were surrounded by German troops. Many soldiers thought that was the end; my cousin Raymond Humming bird did. That is until Audie Murphy came in to save the day.

Who is Audie Murphy?

Audie Murphy was born on June 20, 1924 in Kingston, Texas. He was one out of 12 kids, and was the son of a sharecropper, so was raised in poverty. His father found it too hard to feed them all and himself, so he abandoned his family. After a while, Audie was the main supporter of the family until his mother died in 1941. HIs family separated, and he decided to join the Marines. Although, at 5 feet, 5 inches and 112 pounds, Murphy was short and underweight. On June 30, 1942 he joined the Army. He took his basic training at Camp Wolters, Texas and was later transferred to Fort Meade, Maryland for infantry training. March 3, 1943 Murphy was assigned to troop Company B, 1 Battalion, 15 Infantry Regiment, and 3 infantry Division. He would remain in his unit for the rest of his service.

What did Murphy do during his service?

Murphy was a good soldier, and because of good behavior he was promoted to a private first class in May of 1943. When shipped overseas he had participated in nine major battles. On August 15, 1944 Murphy advanced without his unit and wiped out several enemy machine gun nests and captured five GErman soldiers. He was awarded the Distinguished Service Cross. He was also later awarded the Silver Star for another heroic action. He received a promotion on October 14, 1944 to the rank of 2 Lt. However, two weeks later he was hit by a piece of shrapnel and was hospitalized. Although, during the severity of the Battle of the Bulge he checked himself out of the hospital and rejoined his troops. When he saw the German tanks approaching, he jumped into a tank destroyer, and fired at the tanks. He had successfully killed over 100 Germans as the tanks retreated. Rumor is, that he had jumped out just seconds before the tank destroyer blew up.

What awards did Murphy receive?

After the Battle of the Bulge Audie was awarded the Congressional Medal of Honor and soon won all the medals for heroism given by the United States. He later became an actor, and later retired. One Memorial Day Weekend he was flying to a celebration, but the plane crashed. He died with five other veterans on May 18, 1971.

What does this have to do with Texas?

1) Audie Murphy was born in Texas and became extremely famous. 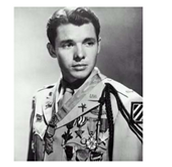 Audie Murphy with some of his medals

A stamp made in Murphy's honor

Battle of the Bulge memorial

Why did I choose this event and person?

I chose this because I became fairly interested in Mr. Murphy, and also my third cousin (Raymond Hummingbird) had participated in this war. He always would tell my family stories about his service, and also about his childhood. I wanted to learn more about the battle he was most famous for: the Battle of the Bulge.

A video of Audie Murphy

Cecily is using Smore newsletters to spread the word online.