Fixing The Problems Of Urbanization

Fixing The Problems Of Urbanization

The Social Gospel Movement was led by Protestants in response to rapid urbanization. Along with America's rapid growth came extreme poverty and harsh working conditions. This group was different from most other Christian groups because they promoted social salvation over individual salvation. Their vision wasn't just equal power but a Christian society where cooperation, respect and compassion would take the place of greed, competition and conflict among the social classes. The Social Gospel Movement led to the establishment of the Salvation Army and the Young Men's Christian Association (YMCA). Both revolutionary in their openness to every economic and racial group.

The main objective of this movement was to establish "settlement houses" in poor urban areas where middle-class workers could live. The settlement community provided services such as daycare, healthcare, and education to improve the lives of the poor. They wanted to help break the cycle of poverty so the deeply embedded social class problem in Europe wouldn't spread to the United States. 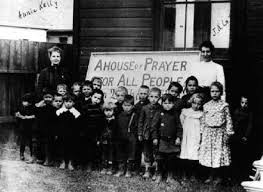