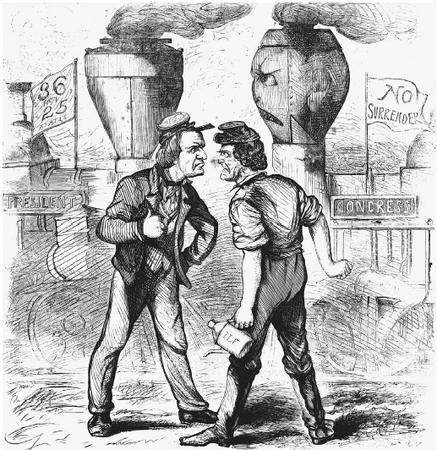 This political cartoon symbolizes the struggle between congress and President Johnson during the reconstruction period. Both the president and congress are portrayed as trains heading directly towards each other. The Radical Republicans had gained the majority of peoples view in congress. This started the decrease to Johnson’s power. This cartoon depicts the political issues that took place during the reconstruction period. This political cartoon specifically connects to the democracy ideal. This cartoon shows that we were moving farther away from the ideals, because the two sides aren't working to together and involving citizens. 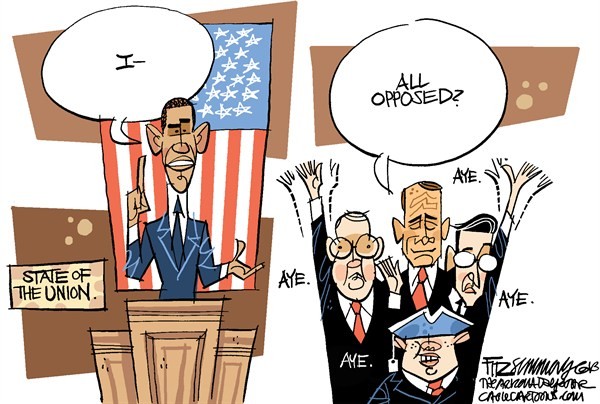 This political cartoon is a modern day example of how the president and congress don’t still don't always agree. A stung relationship is imperative for a democracy run government, which isn't shown in the cartoon. Although it is a political cartoon, so it is supposed to be exaggerated. But, I think the comparison shows that we have taken a step in the right direction towards the democracy ideal but we need to keep moving foreword, and give the citizens of the United States more opportunity (another ideal) in congress. 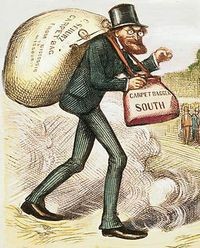 Carpetbaggers were people who came from the North to profit off of the Souths instability (Mainly in the reconstruction era). The cartoon above portrays a greedy carpetbagger who is essentially trying to scam people out of their money. This specific act doesn't move america towards it's ideals at all. In fact, It hurts citizens who are already finically unstable, which hurts the economy even more. It doesn't give people who are unstable the opportunity to get back on their feet finically. 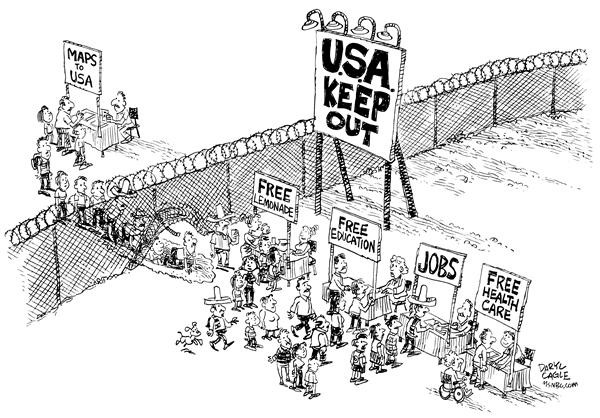 Many immigrants come to the United States for a better life in general, and many come for jobs, and economic stability. The cartoon shows the benefits of America and building a better life. I chose this political cartoon because most Americans are strongly against immigrants coming across the American border. This can obviously relate to a carpetbaggers because they came to areas during the reconstruction period to profit off instability. Immigrants and carpetbaggers both want to move to a different area to profit for the good of themselves. Obviously carpetbaggers have a more villainous way, by profiting off others instability. But, they both move to better themselves and build an economic prowess. I think the acts of immigrants moves us farther away from the ideal of opportunity. I think this because thousands of people access to America. Which ultimately denies them economic opportunity. 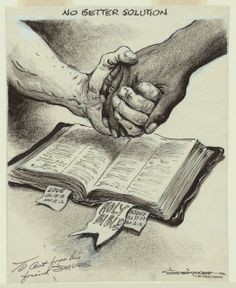 The political cartoon above demonstrates blacks and whites unifying even in a time where it is frowned upon. The gesture of holding hands signifies the bonds between all people, of all race. This shows America getting closer to the ideal of equality and rights, because not all whites were against blacks. It shows that we as citizens of America no matter size, shape, or race we support each other. 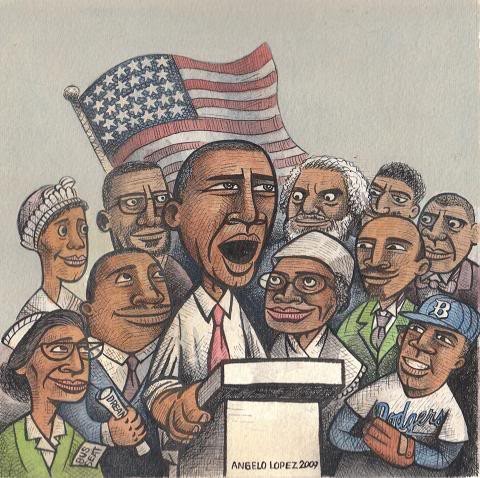 Although, the cartoon above can represent social, and political examples in history, I believe this best represents the social aspect the best. This cartoon shows how President Obama has became a leader for blacks everywhere. In the background there are all the black civil rights reformers. I think the cartoon represents how despite all odds President Obama became the first black president, with the influences of all the reformers behind him in the cartoon. I can best relate this to the ideal of equality. This is obviously a powerful cartoon that represents blacks were able to stick together and get there rights that they deserved. It also shows that they can go beyond just equality, and lead the country. So this shows that America has come a lot closer to equal rights, and equality.