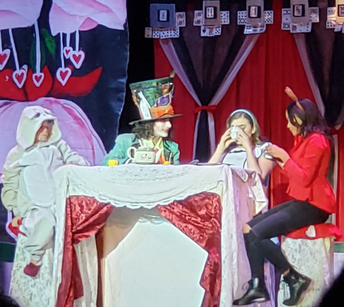 Awaiting Wonderland Worth the "Wait"

It was standing room only on opening night for the Theater Arts production of "Awaiting Wonderland", and the show didn't disappoint. As always this is a student-run production, and the students worked diligently on the costumes, sets, lighting, etc. But they take their role from the teachers that form the production crew. Led by Tammy Jacobs, the Director and Theater Arts teacher, this years team worked "wonders".

Joseph Stratton, who teaches Coding among other subject areas, was in charge of the back stage crew. He managed the sounds and lighting, and also choreographed the dance pieces. He was the man behind the scenes, maintaining cohesiveness. The costumes and makeup earned rave reviews for their Broadway show quality, as Elizabeth McParland, our Art teacher, and her students outdid themselves. Many parents in attendance were overwhelmed with the quality. Not to be outdone, was the performance itself. Ms. Jacobs did an outstanding job in providing direction, guidance, and expertise in the acting of the students, and it certainly showed. It truly was a team effort not just limited to WHS staff and students.

In typical WHS form, the production received a huge boost from our alumni. Donations of props from Weehawken HS graduates Giovanni and Dena Calabrese from Themendous, not only enhanced the entire event, but also added the hometown community effort that makes Weehawken High School stand out from our contemporaries. In addition, recent graduates Chris Devaney, and Adrian Castellanos used their years of experience working in the back stage crew to run all of the lighting for the show. The overall result, was a fantastic show that not only showcases the talent at WHS, but the close knit community we are. 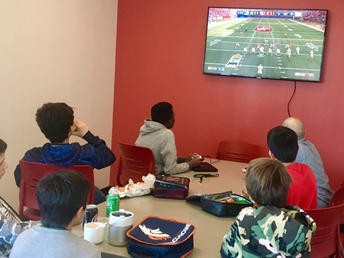 William Campi, History teacher and Football coach, has been a fantastic addition to WHS. He really embraced his role and the Weehawken culture. This year he has taken it one step further. Campi has put together a video game tournament using Madden football as the platform to raise money for ALS research to help assist a friend.

The Madden Tournament was organized to assist Tim Green, a former NFL player, best selling author, lawyer, and great father. Green has done an astounding amount in his life and continues to do so despite his ALS diagnosis. His strength and his family have been an inspiration with #TackleALS and Campi felt that the tournament could be something to bring some joy and camaraderie around the holidays to WHS.

With support from faculty (Mr. Ferullo, Ms. Amato, Ms. Parkinson, Mr. Flores, Mr. Perry, and more) a couple students (Jimmy Lopez and Sean Guerriero in particular) he was able to make this a reality. Over 400 dollars has been raised with over 50 participants from all grades, and several staff members. And the camaraderie, Campi hoped for is evident when watching a 7th grader take on a senior, or a teacher face off against a student. Some light-hearted smack talking, and some competitive fires are evident, but at the end of the day a good time was had by all. When the dust finally settles, the Madden Tournament Champion was Giuseppe Salandra, but the real winners were all the participants; having fun, sharing good company, all for a good cause. 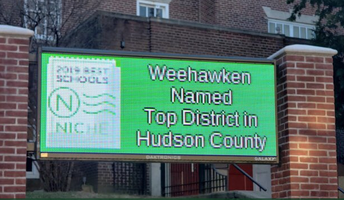 For the second consecutive year the Weehawken School District was named top of Hudson County. The WTSD was rated #1 overall in Best Places to teach , and #1 for having the best teachers in Hudson County. Neither ranking comes as a surprise to anyone who has been involved with the schools through the years. WTSD has the hardest working and most dedicated teachers, many sacrificing their valuable free time to commit their efforts to the children of Weehawken.

Niche is a website that helps people research schools and neighborhoods in their efforts to find one they are comfortable moving to. They rigorously analyze dozens of public data sets and millions of reviews to produce comprehensive rankings, report cards, and profiles for public schools. According to their website, they have millions view their rankings to research public and private k-12 schools. So receiving this coveted ranking for the second consecutive year is a real feather in the caps of the WTSD.

To view the entire ranking, as well as the methodology please click :

Homecoming, and the ensuing dance, are one of the big moments for not only seniors, but all students alike. The time honored tradition of naming the Homecoming King and Queen, is as old as the high school itself. Normally, this tradition occurs at the end of the football season, but recent changes in scheduling, the result of a change to the play-off format, necessitated the season starting and ending earlier for most schools.

The football season ended before Halloween for the first time ever, but the planning for the Homecoming Dance remained for a late November night. As fate would have it, a freak snowstorm slammed the entire East Coast on the night of the event and pushed it back further. But all of the hiccups would not dissuade the gritty students of WHS.

Over 200 students, by far the largest turnout in recent memory, packed the charmingly decorated gymnasium for a night of dancing. Organizers Melissa Viera-Bodtmann and Joseph Stratton went the extra yard to make sure the night was a success. Student D.J. Alejandro Cosme, kept the beats pumping, and the part-goers happy. All leading up to the moment of the evening; the crowning of the King and Queen, and their Court. To a rousing ovation the 2018 Homecoming King, Manny Encarnacion, and Queen, Loen Alburquerque posed for picture after picture in what is sure to be one of the highlights of the year. 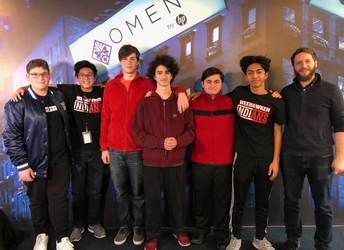 Weehawken High School has all of the typical teams that a smaller student body would expect; baseball, basketball, football, soccer, etc. In the last few years we have grown our athletic sports offerings, by adding girl's swimming, boy's lacrosse, and the return of our own wrestling team. But one of our more popular teams, is one that does not require great speed or strength to excel; it is our ESports team, now in its' second year. Where traditional sports need durability and physicality, exceptional ESports participants excel in hand-eye coordination, outstanding strategy, and quick reflexes. WHS ESports Overwatch team has proven to have all of that an more. The team, under the direction of Coach Paul Bannon, has been turning heads all year, and their gaming led to some well-earned recognition.

The Weehawken Overwatch team participated in the NYXL High School Invitational where four of the top ranked teams in the nation participated in a double elimination, best of three tournament. Team members experienced their first ESports lan event and networked with some of the most important figures in east coast ESports development. The team developed new friendships and gaming rivalries amongst peers. WHS is hoping to participate and run events like this in the future in all of the games we offer in our ESports program.

Check out www.highschoolesportsleague.com for some information about our league or contact Paul Bannon (pbannon@weehawken.k12.nj.us) for further explanation of the Weehawken ESports team.

For all WHS sporting: 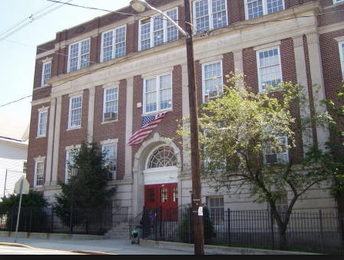