Get email updates from Collin: 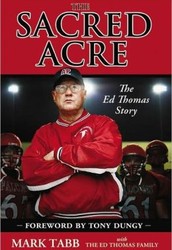 In the book their were several places where Ed Thomas showed perseverance. Ed Thomas was the football coach and someone that everyone in the community had respect for. Parkersburg was hit by an F-5 tornado which destroyed 250 homes. Ed Thomas was distraught about everything and he didn't no what to do. The whole community was waiting to see what their beloved coach would do. He rallied the community into believing that they could put the community back together. The community believed Ed Thomas. Right after the tornado hit Ed Thomas began digging people out of their homes. He barely slept, because he was to busy helping people. A day after the tornado he told everyone they would still have their first home football game. This gave people a sense of hope and comfort. The people of Parkersburg went as Ed Thomas went. As I vaguely explained at the beginning, below are three ways in the book where Ed Thomas persevered.

1. In the darkest hour Ed Thomas gave the community hope.

2. Ed Thomas cared more about his community than his well being. He spent countless days using all of his energy helping people with little to no sleep.

3. Ed Thomas's dad was an alcoholic and he didn't let that stop him from being himself. He didn't look poorly off his dad either. He still had respect for him.

Leadership is a quality Ed Thomas possessed at a young age. He learned a lot of it from his mother, but some of it he learned on his own. In high school he was a quarterback and lead his team to numerous wins. His coach let Ed call his own plays because he had so much knowledge of the game. His teammates also respected him. Ed Thomas knew in high school that he wanted to be a football coach and a teacher. His goal was to teach young kids the aspects of life. Not only did Ed Thomas lead his football team out onto the field on Friday nights, he brought a community together through football. Ed Thomas was a very religious man as well. Three ways that Ed Thomas showed leadership throughout were:

1. Ed Thomas lead Parkersburg out of disaster and everyone followed him.

2. He taught people how to be the best they could be. He cared about everyone from the star players to the players who never stepped on the field on a Friday night.

3. Ed Thomas lead by example. Former players called him on a regular bases to just ask him questions and ask for suggestions.

¨If all I have taught you is how to tackle and block, then I have failed you as a coach.¨