How did this musical artist or group change Rock and Roll/Rhythm and Blues forever?

The Beatles were innovators. They experimented with instrumentation (i.e. the string quartet in Eleanor Rigby, the use of the Sitar and other middle eastern instruments), production techniques (tape loops and so forth in Revolution 0, Tomorrow Never Knows, etc), song forms (A Day in the Life, etc), and many other things. 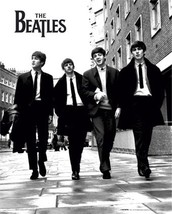 Their music was different from everything else at their time. It was new, good, and had meaning. They were not just in it for the money, but they actually had a passion for writing and singing music. They started a revolution in the music industry by feeling music and not just singing it.

Summarize the Roots of Rock “n” roll/Rhythm and Blues

Rock and roll emerged as a define musical style in the United States in the early to mid-1950s. It derived most directly from the rhythm and blues music of the 1940s, which itself developed from earlier blues, boogie woogie, jazz and swing music, and was also influenced by gospel, country and western, and traditional folk music. Rock and roll in turn provided the main basis for the music that, since the mid-1960s, has been generally known simply as rock music.

Today, what makes this musical artist or group still popular?

The Beatles influence on pop culture is still being felt in the contemporary world, and they changed the way that bands use the recording studio to make music. They were one of the 1st groups to treat an album as a work of art in its own right instead of just a collection of singles, really setting the group apart from the others.

What are some of their top songs?

Follow Jeffrey Yu
Contact Jeffrey Yu
Embed code is for website/blog and not email. To embed your newsletter in a Mass Notification System, click HERE to see how or reach out to support@smore.com