Eleftheria is using Smore newsletters to spread the word online.

Get email updates from Eleftheria:

Water is life...the myths, the legends and the facts

When the Estonian mobility finished back in mid-October 2019, all Erasmus+ Blue Countries partners were anticipating the next meeting in March 2020. This time the place was the 15th Primary School of Rethymno on the island of Crete, Greece.

The focus was on myths and legends related to water. The months between October and March were full of preparations for the presentations.

Well, no one expected what would happen next...

A series of unfortunate events- part 1

At some point in February all the news feeds were flooded with information about a new contagious virus killing people somewhere in China. It isn't untrue to say that the thoughts were "OK! An unknown virus but it's still pretty far away from us in Europe". Well, think again. The reality hit hard on us in the next few months.

Italy was the first country that was affected by this virus, already known as COVID-19. Things were getting worse day after day. Our Italian partners were the first to announce that they cancel their participation in the mobility meeting. After lots of discussions with parents, Education Boards and National Agencies Polish and Irish partners sadly withdrew from the mobility, too. As Greece had no COVID-19 cases by the beginning of March and despite any worries Estonian and Romanian partners decided to join.

So, with two partners on their way the programme was set to start...but not without troubles and unexpected events. Our Romanian partners experienced a horrifying flight when strong south winds forced the pilot to return the plane to Athens airport. Fortunately, the next day everything was much better and we finally welcomed Romanians in the morning and Estonians late in the evening of March 8th.

The programme officially started on Monday 9th. The students and teachers of the 15th Primary School of Rethymno welcomed the Romanian and Estonian groups with a short ceremony. The headteacher organised some activities to let students get to know each other. Unfortunately, everything had to be done indoors as heavy rainfall set the scene for the day. The day continued with the presentations of myths and legends. Estonian and Romanian students had worked on their local stories producing beautiful presentations. Italian, Irish and Polish students had already sent their work that was also presented. This part of the schedule ended with Greek students acting in a short theatrical play about a legend on immortality water.

The second part of the day involved a tour around the old town of Rethymno. Unfortunately, the rainfall was so heavy that did not allow the partners to leave the school premises. Instead there was a "virtual" tour with the guide presenting the history of the town and its landmarks using some videos of Rethymno. 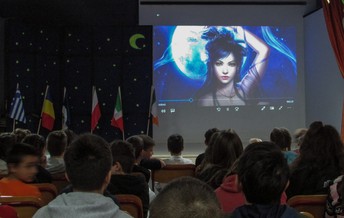 Romanian presentation- The legend of the Danube 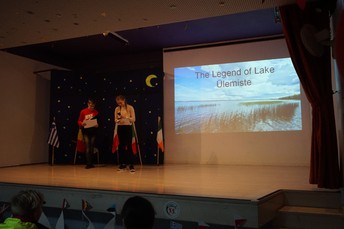 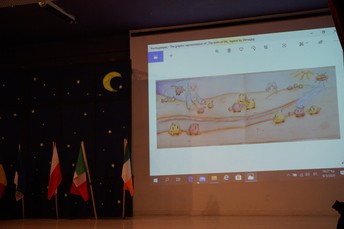 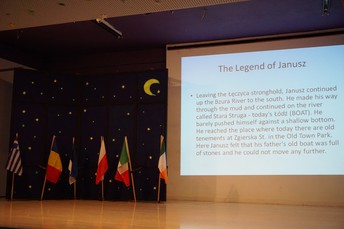 Polish presentation- The legend of Janusz 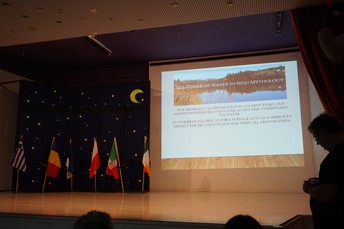 Irish presentation - The power of water in Irish mythology 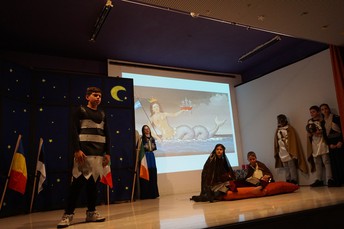 A series of unforunate events - part 2

Before the end of the day, news started to pour in that school trips are forbidden because of COVID-19. This was the first of a series of measures that Greek authorities started to take in order to control virus spread. As a result the Greek students could not participate in Erasmus+ scheduled trips the next two days.What a disappointement!

On the second day a bus trip to Cretan Aquarium "Thalassokosmos" and to the archaeological site of Knossos was scheduled.

As Greek students were not allowed to officially participate in this trip, their parents "saved the day". Parents and students with their private cars followed the Erasmus+ group.

The visit to "Thalassokosmos" included a guided tour around the aquarium and a workshop. Students were first informed about the various sea threats and then they had a hands-on experience on recognising various types of litter and how difficult it is to clean up sand.

The visit to Knossos was also a highlight of the day. One of the most interesting parts of the tour was when the guide described the highly sophisticated irrigation system of the Knossos palace during the Minoan era about 3000 BC to 1450 BC. 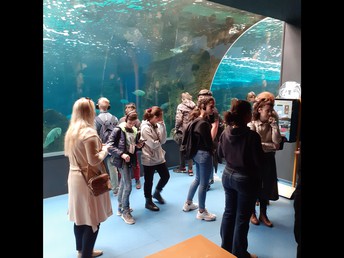 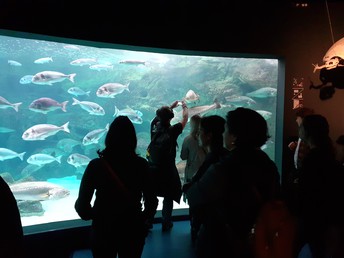 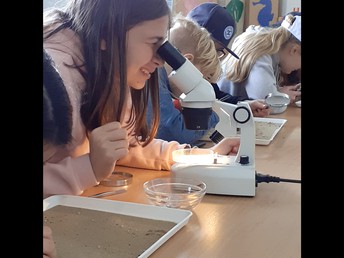 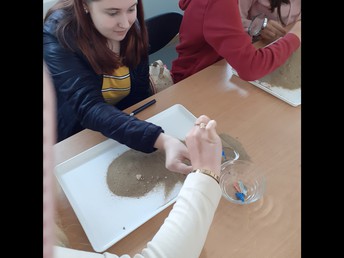 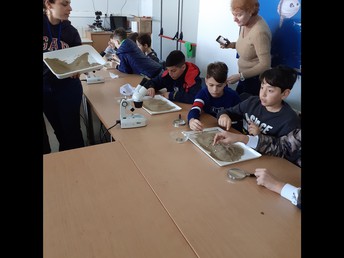 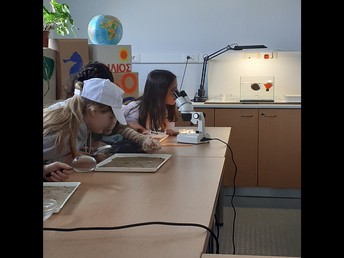 At the archaeological site of Knossos 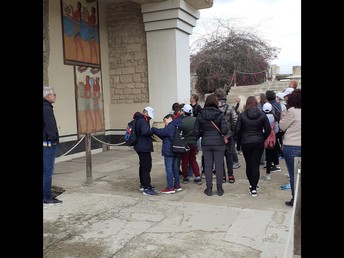 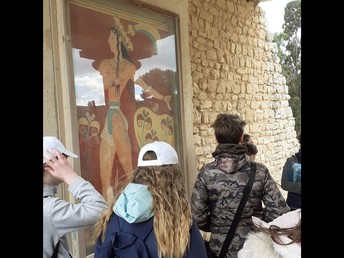 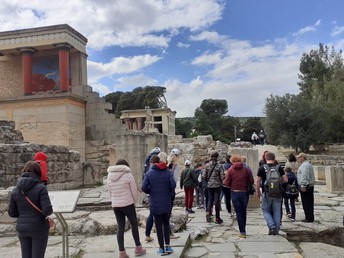 A series of unfortunate events - Part 3

Things started getting more serious with COVID-19 and more measures were taken each day. This time it was decided that schools would close on Wednesday 11th March. As a result all the activities programmed for the last day of the mobility at school had to be cancelled.

On Wednesday 11th our Erasmus+ group travelled to the west of Crete, to the beautiful town of Chania. There, we visited the Maritime Museum where students, teachers and parents - the ones that escorted their kids to the trips- were guided through the maritime history starting from ancient years to World War II.

The Museum authorities approved our request to visit a replica of a MInoan ship. So, after a walk around the picturesque old port of Chania, we entered the building that the ship is stored. We admired this structure that was built only with wooden materials as no metal was used, just like in Minoan times. It is also a fully functional ship as it sailed from Athens to Crete in 2004, Athens Summer Olympics year.

Later, we visited lake Kournas to admire the beautiful colours of the lake, learn a few things about its history and importance on the local ecosystem.

Finally, the trip ended in the village of Argyroupoli where everyone enjoyed a delicious lunch with local recipes. 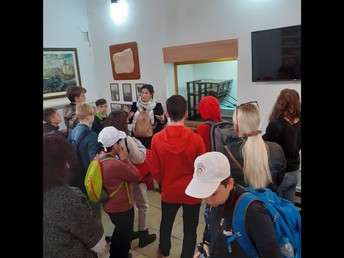 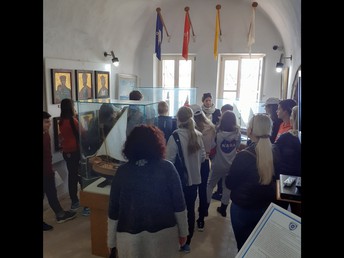 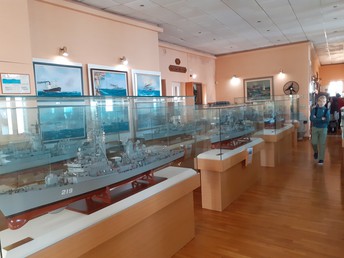 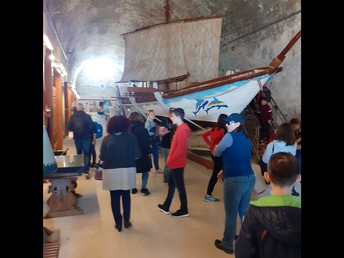 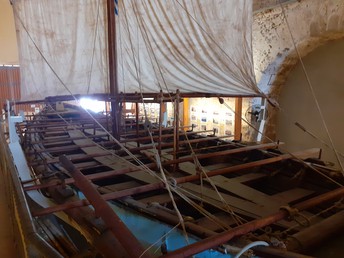 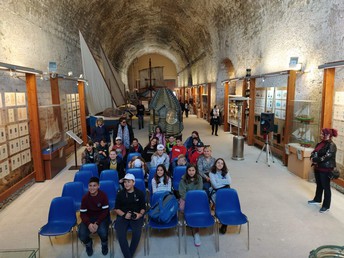 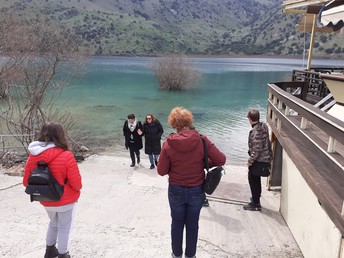 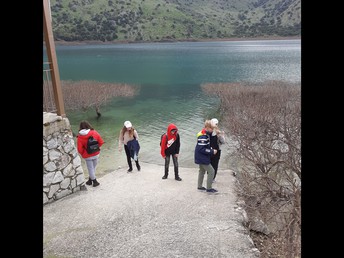 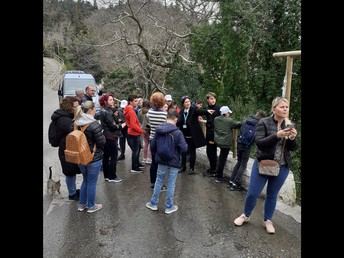 Thursday was the last day of the programme and it was the one that had to be completely rescheduled as schools were closed. The one activity that had to be realised was the online meeting of the coordinators. Not without problems, the meeting took place either from hotel rooms or at the school computer room.

As teachers had their meeting, students, some Greek teachers and parents had the guided tour around the old town of Rethymno. As soon as coordinators finished, they joined the students. The whole group finished the tour at the old Venetian harbour promising to meet again later for a farewell dinner. 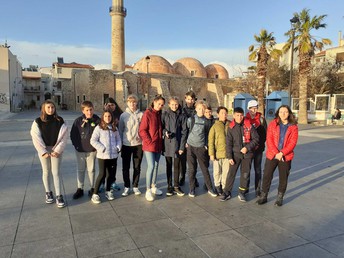 At the Venetian harbour of Chania. The Ottoman minaret and mosque at the background 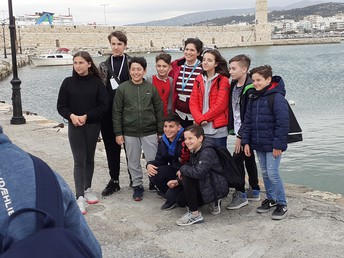 At the Venetian harbour of Rethymno with our guide. The Egyptian lighthouse at the background.

A series of unfortunate events- Part 4

But as a Greek saying goes "When people make plans, God laughs". Once more nothing went as planned. No music band, few participants. Most host parents where afraid to join the dinner. It was this day that more measures and restrictions were taken by the Greek Authorities so everyone was justifiably upset and seriously concerned.

On a "funny" note. Our group was the last one to visit the Aquarium, Knossos, the Maritime Museum and the Thursday night restaurant. As soon as we visited a place, there was an announcement later the same day that it had to close because of the pandemic.

It is well known to everyone what followed these days. Not only schools, museums, shops and restaurants but whole countries closed down. The time of quarantine started. A difficult and strange period of our lives. Regarding the Blue Countries Erasmus+ project all the coordinators had to take some hard decisions for the future of the programme. Unfortunately, Romanian mobility was cancelled. As a result, it was decided to finish up the programme and not to ask for time extension. However, on a positive note, some activities are still running and students are creating amazing things.

Because nothing must stop abruptly, everything must flow, as water flows in streams, rivers, lakes and the seas. Because water is life. 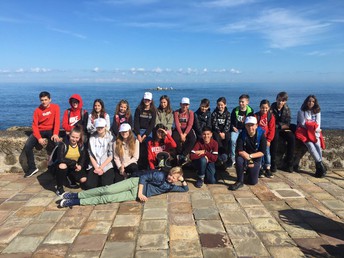 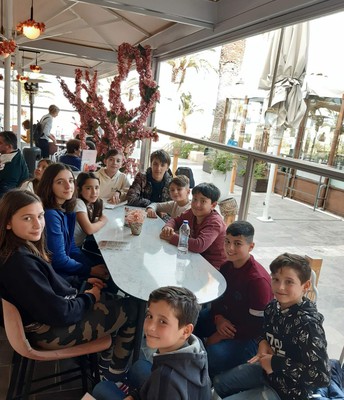 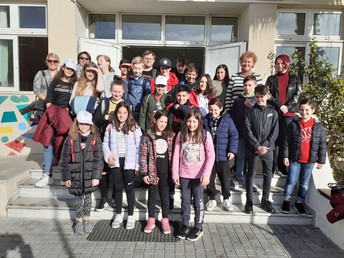 Eleftheria is using Smore newsletters to spread the word online.