It's time to start reading the nominees for the 2015-2016 South Carolina Book Awards! For a quick peek at the nominated titles, check out the Book Award videos on the Fork Shoals Library's YouTube channel.

Fork Shoals participates in both the state Picture and Children's Book Award programs, sponsored by the South Carolina Association of School Librarians. Students who read at least five books from each level are eligible to vote for their favorite in February of 2016. 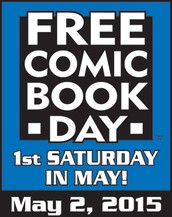 All around the country, comic book stores will be giving away free comic books on Saturday, May 2nd! Many stores may also be hosting special guests, contests, or other events.

Our final reading challenge for the year is underway. Your goal is to read as much as possible between now and May 22nd. Reading logs will be sent home and will be available in the library, on the school website, and here.

All reading logs will be due no later than Wednesday, May 27th. Prizes will be awarded to the top readers in each grade level, and every participant will receive recognition. 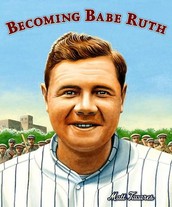 Becoming Babe Ruth by Matt Tavares takes a look at what turned a boy into a legend.

George Herman Ruth definitely didn’t start out as a success story. At the age of seven, this young trouble-maker was sent to a reform school in his hometown of Baltimore. He, along with 800 other boys, attended Saint Mary’s Industrial School for Boys, a strict school where they lived, worked, and learned a bit about discipline.

Saint Mary’s wasn’t all bad, though. It was here that George Ruth began playing baseball. With the guidance of Brother Matthias, this young man developed into a world-class baseball player, and he could do it all. He could hit, run, and pitch. And pretty soon, he attracted some notice. In 1914, George Ruth was offered a contract with the Baltimore Orioles. Shortly after he started playing, he was given the nickname Babe Ruth.

Babe Ruth didn’t stay in Baltimore for long. He went on to play with the Boston Red Sox and the New York Yankees, but he never forgot where he came from. He knew that Saint Mary’s and Brother Matthias made him the man he was, and he did everything he could to give back to them.

Becoming Babe Ruth is an inspirational story about an American legend. It shows readers young and old the importance of honoring one’s past and the path taken to success. None of us gets through life alone, and remembering one’s roots and those who helped along the way is vital.

Many thanks to all of your help for the Spring Spectacular. Your donations and help with time helped make it a successful event. Thank you to the Carnival Committee for organizing such a fun event for our school!

This year, students in third, fourth, and fifth grades in South Carolina will take a new test, the ACT Aspire (April 28-30). Students in those grades will take ELA (English, reading, and writing) and mathematics tests. Additionally, students in fourth and fifth grades will take SCPASS science and social studies tests (May 7-8). ACT Aspire, which is a timed test, will require students to answer multiple choice questions and to write their answers. SCPASS, which is an untimed test, will require students to answer multiple choice questions. The ACT Aspire and SCPASS tests are aligned to state standards and what is taught in your child’s classroom. Your assistance in ensuring that students are at school and on time and avoiding doctor’s appointments during the testing windows is greatly appreciated.

Follow Kelly Knight
Contact Kelly Knight
Embed code is for website/blog and not email. To embed your newsletter in your email, click HERE to see how or reach out to support@smore.com