Don't Be A Bully. It's Unruly.

Don't Be A Bully. It's Unruly. 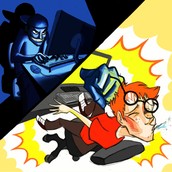 
According to the website stopbullying.gov, "cyberbullying is bullying that takes place using electronic technology. Electronic technology includes devices and equipment such as cell phones, computers, and tablets as well as communication tools including social media sites, text messages, chat, and websites." Because many people, both young and old, use a variety of social media websites, they allow themselves to be open to acts of cyberbullying. It is a serious dilemma that can potentially encourage depression or negative feelings in its victims and it needs to be stopped.

Young people were found to be twice as likely to be cyberbullied on Facebook as on any other social network. Over 25% of teens claim to be targets of cyberbullying. New research suggests that young males and females are equally at risk of cyberbullying. 67% of children would turn to their parents if they were cyberbullied online; however, 40% of parents do not know how to respond if their child is cyberbullied or how to set-up filters on computers, tablets, and mobile phones that could protect their children. Unfortunately, this issue is not only limited to the United States. A survey done by legal experts Slater and Gordon and the Anti-Bullying Alliance revealed that over half of children and young people in England, 55.2%, accept cyberbullying as part of everyday life. In more urgent cases, instances of cyberbullying has led to an increase of suicide.

Please join us and take a look at our video to see the impact that cyberbullying has on individuals. Don't be a bully! It's unruly!

www.dosomething.org
To This Day Project - Shane Koyczan
We wanted to share this spoken word piece by Shane Koyczan to illustrate what it can feel like to be bullied in person or online and how difficult it can be to overcome.

Ashley A.
"It's a very common problem for our generation. Since the internet, it's become easier to communicate, but that's not always a good thing."

Lauren A.
"Cyberbullying comes in many different forms and can be done on multiple websites and by anyone."

Brendan C.
"Cyberbullying can lead to suicide in some instances."

Kaylee C.
"It can affect everyone; not just kids. And it can be stopped."

Katelyn E.
"It's a very common problem and people can be easily hurt from it."

Caiye (C.J.) S.
"It's a very common problem and can lead to depression in some people."

Caleb S.
"I want cyberbullying to stop. I was surprised to learn how it has increased the suicide rate."

Elizabeth W.
"It really affects the lives of young kids, making them depressed. It really impacts a person's self-esteem negatively."

What Can You Do?

If you are a victim of cyberbullying