What is the Cost of Pursuing a Dream?

What is the Cost of Pursuing a Dream?

Defined as pertaining to, or concerned with the principles or rules of right conduct or the distinction between right and wrong. Whether you know it or not, morals have been uprooted to mold one's American Dream. While they can be altered, the character and person you are has been effected by your own personal morals. In the conquest of becoming and succeeding one's life and goals, morals are put aside and forgotten to pursue the American Dream. 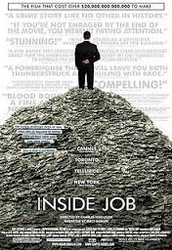 When it comes to Wall Streeters, they all have one thing in common; to make money. These millionaires or even billionaires will keep nothing off limits to at the end of the day, have their personal fortunes. In the movie, Inside Job, you get an inside look in the lives and happenings of these New York top corporations. The industry is controlled by investment banks like Goldman Sachs, Morgan Stanley, and Lehman Brothers, who in the end, caused the collapse of our stock market. These investment companies began the crash by selling Internet companies they knew would fail, causing the investors to lose trillions. After this, Wall Streeters began cheating and lying their way to keep their money while the rest of America loses theirs. These Wall Streeters are not only going to keep sliming their way to the top, but are teaching the next generation the same tools. These men went to the most prestigious Universities in America, and climbed their way to the top because of their immaculate skills and knowledge. They threw away everything they cared about or morally believed in to cause one of the biggest stock crashes in America to only leave with their billion dollars and a nice new jet. Gordon Gekko also expanded on the idea that Wall Streeter's are selfish, greedy people who have lost sight in what is important and morally correct. He elaborates around the fact that "management has no stake in the company," (Gekko 2). No matter what happens, these company owners will leave with their money. With this, Wall Streeters have lost sight in doing anything morally correct. They have caused a recession, and lost all their morals and values that "this great industrial empire," once had (Gekko 2).

These two sources synthesize together by being prime examples of why money isn't everything. If you put everything on the line to become wealthy, at the end of the day you will only have your money left. While it is great to be successful and to achieve the American Dream, if you don't bring your morals with you, you won't truly be able to enjoy achieving your dream if you aren't the person you were when it was just a dream. 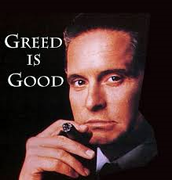 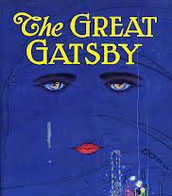 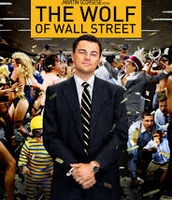 The Wolf of Wall Street

The Pursuit to "Happiness"

In the American classic novel, The Great Gatsby, Daisy Buchanan strived to be passionately in love with an elite socialite who could give her the social life she wanted while loving her inside and out. Tom Buchanan was everything Daisy wanted in a socialite, but their love was not real; he even went to the extent of cheating on her with Daisy's knowledge. Daisy fell in love with Jay Gatsby, who had money but was not born into elite hood. As much as he tried to make it the top to win over daisy, it was just too late into his life to become the man he and Daisy wished. Daisy had to choose between real love or the elite social life with a respected husband. In the end, Daisy put her morals aside, knowing what was right, and stuck by Tom's side. "They were careless people, Tom and Daisy-they smashed up things and creatures and then retreated back into their money or their vast carelessness, or whatever it was that kept them together, and let other people clean up the mess they had made..." (Fitzgerald 179). Daisy threw her morals away, to have money and popularity, two of the biggest materialistic things in the world. In the recent Martin Scorsese movie, The Wolf of Wall Street, Leonardo DiCaprio stars in a move based of the life of Jordan Belfort, a wealthy stockbroker, who made his way into Wall Street only to have it corrupt and tear his life apart. Belfort lived your average American lifestyle. He was happily married trying to find his way in the workplace. 'Lucky' for him, he became a successful stockbroker on none other than, Wall Street. As he began to receive large amounts of money and became a wealthy businessman, Belfort lost sight of his morals. He became a different person as he pursued his dream of being a successor on Wall Street. His wife left him, and he resorted to drugs, sex, and illegal activity. In the end, his so-called dream only put him in more trouble involving crime, corruption, and the federal government. Josh Hamilton, in his I Am Second video, testifies about his life and how to achieve his happiness and the adrenaline he wanted, he resorted to drugs and alcohol to get them. Growing up, Hamilton was always good at sports. After High School, he got drafted and started playing for crowds and getting more money than he had ever thought. He began to know what its like to feel the adrenaline of getting the man out at first and hearing the crowd cheer you on. Hamilton, while a wealthy, star baseball player at such a young age, only loved the game because it made him happy. He began to crave the adrenaline more and that is how he got into the drug and alcohol usage. Hamilton put everything he was as a young baseball player and believed in to feel what he thought would make him happiest. He was no longer playing the game for the right reasons and no longer was the baseball player he hoped to be a kid. His idea of what would make him happy backfired when baseball was taken away from him and he didn't recognize the person he had become. He knew he could do better.

All of these three sources ties around the central idea that when pursuing a dream it may only leave you with materialistic, short-termed happiness. If you leave your morals behind to achieve one's American Dream, you will not become happy and you will not be the person you want to be. Pursuing your dream has the ability to distort your thoughts and make you become a person you know is not morally right.

I am Second® - Josh Hamilton