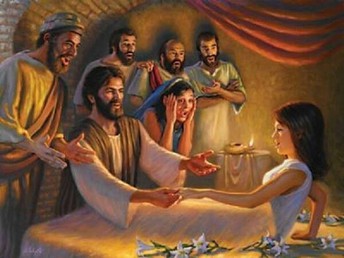 Jesus Raises a Girl to Life

Who do you go to when you need help?

When Jesus lived on this earth, many people came to Him for help. Jesus gave sight to the blind, He healed people who could not hear and speak, and He healed others who could not walk. People were amazed. But they never could have imagined the miracle that Jesus would do next. A synagogue ruler named Jairus came to Jesus, begging Him to heal his very sick daughter. But on the way to Jairus’s home, servants of Jairus came and said that his daughter had died. Jesus continued on to the house anyway, taking Peter, James, and John with Him. When He got there, Jesus told the people who were crying, “The child is not dead but sleeping.” The girl really had died, but for Jesus, death is only a rest, a time of "sleep" until He wakes us again. The girl's parents couldn't believe what happened next . . .

Heavenly Father, thank You for listening when we call to You in prayer. Help us trust You to help us and and care for all our needs. In Jesus’ name we pray. Amen.

Our God Jesus has power over death.

Jairus asked Jesus to come and heal his daughter, who was dying. The girl died before Jesus got to the house, but Jesus made her alive again!

Jesus cares about us, and He wants us help us. Jesus has power over death, because He is God!

Jesus has power over all things, including death. Jesus defeated death and the devil when He died on the cross and rose from the dead. One day He will return and raise all believers from the dead, and take us to be with Him forever in heaven!

This Bible narrative has big highs and lows. Read the Bible account again. As you read it, have kids crouch down for the “low” parts and reach up high for the “high” parts. At the end, when Jesus raises the girl to life, give hugs or high-fives all around.