Keagan is using Smore newsletters to spread the word online.

Get email updates from Keagan: 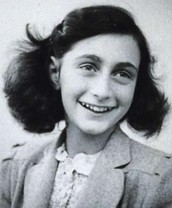 Who is Anne Frank?

Anne is a girl that goes into hiding with her family and family friends. She is a Jewish girl in the time of the holocaust. She is a very talkative character and she is living in an environment where you can’t talk that much. She has to leave all of her friends and a lot of personal items back at her original home. Her goals in life are to grow up and become a writer. Anne is very young she is still a teenager.

The theme of the Diary of Anne frank was never give up no matter how hard it got. They stay up there for years knowing everyday could be there last but they never give up. They keep fighting and the try to survive in the harsh times when they are short on food and money. Mr. Frank never gives up on his family and his friends he is always encourages them and motivates them to keep fighting. They know that hordes of people are getting swept out of their houses and sent to death camps, and they have a chance to survive and get through it all. All characters in the story show a sign of never giving up at time while they also sometimes think about it.

The theme from the diary of Anne Frank is to have hope in tough times. All characters have hope in the story. All the characters talk about what they are going to do when they a free. Anne said she wants to become a writer or an actress. They all want to get out and so they all work together to survive. When it is Hanukah they don’t forget about they religion they stick with it and praise it.

I chose a person yelling because Anne is a talkative person. She always gets yelled at for talking when she shouldn’t. Anne is also always getting yelled at because she always wants to get in on the conversation when it’s not her business. Peter calls Anne Mrs. Quack Quack because Anne is always talking. When it is work hours Anne cannot talk neither can anyone else that is living up there with them. When the work hours are over everyone can talk and she gets up and starts talking to everyone asking what all they did while they were waiting on the work hours to end.

Keagan is using Smore newsletters to spread the word online.