Ginger is using Smore newsletters to spread the word online.

Get email updates from Ginger:

The defining characteristic of disruptive mood dysregulation disorder (DMDD) in children is a chronic, severe and persistent irritability (). This irritability is exhibited by the child as a temper tantrum, or temper outburst, that occur frequently, which is at least three times a week (Grohol, n.d.). Even when the child isn’t having a temper tantrum outburst, they appear to be in a constant irritable or angry mood, which is observed all day and every day. This is a new disorder, which was only added to the DSM in 2013 (Grohol, n.d). This disorder was created to eliminated the diagnosis of bipolar disorder in children.

Cons About Diagnosing Children With DMDD:

When the DSM-5 published in May of 2013, many mental health practitioners were concerned with the addition of DMDD. Duke University psychiatrist Allen Frances worried that the addition of DMDD to the DSM-5 "will turn temper tantrums into a mental disorder" (Dobbs, 2012). Frances, who chaired the revisions of the DSM-4 claims that the diagnosis is too broad and could be a dangerous diagnosis (Dobbs, 2012). Many mental health practitioners are worried about overdiagnosis.

Pros About Diagnosing Children With DMDD:

Over the years, there has been a drastic increase in the frequency in diagnosis of bipolar diagnosis in children and adolescents. Using the proper diagnostic criteria, the hopes of adding DMDD to the DSM-5 would be to decrease the amount of wrongly diagnosed children with bipolar disorder (Margulies, Weintraub & Basile, 2012). Bipolar disorder is often treated with strong antipsychotic and mood-stabilizing drugs such as Lithium and Risperdal (Dobbs, 2012). These drugs have strong side-effects and can also create a huge social stigma for a child. DMDD advocates claim that the addition of DMDD to the DSM, would allow for the alternative diagnosis that carries less of a social stigma and less chance for medical (drug) interaction (Dobbs, 2012). 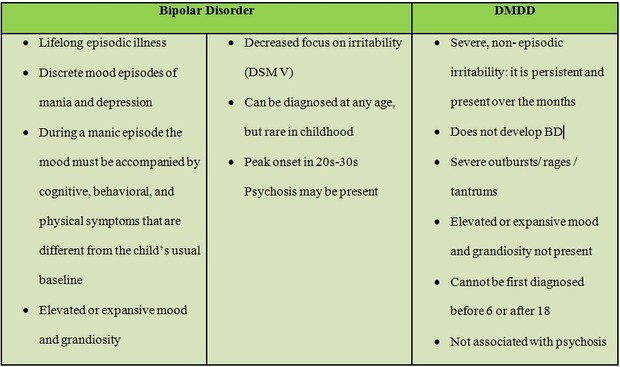 Ginger is using Smore newsletters to spread the word online.