raina is using Smore newsletters to spread the word online.

Get email updates from raina: 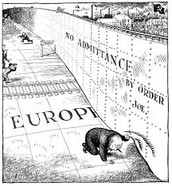 Containment is an important policy during this time period because it shows how worried noncommunist countries where about the spread of communism to Western Europe, China, Korea, and Vietnam. President Harry Truman was determined to stop the spread of communism so he called a meeting with all of the US allies. This meeting -and others like it - would be the creation of the United Nations and NATO. But the US faced other problems besides communism during the Cold War, recently Fidel Castro has taken over Cuba and makes it into a dictatorship. Castro also fears that the US is going to invade Cuba, and he's not far from it. The Bay of Pigs happens - even though the attack is unsuccessful - and results in an alliance between Cuba and Russia. Khrushchev makes it seem like he really wants to protect Cuba but in the end he really just used them to prove to the US that Russia is just as bold as them. This leads to the Cuba missile crisis.

raina is using Smore newsletters to spread the word online.