Get email updates from D:

The Capture of the Temple

The Capture of the Temple

The Story Behind Chanukah

Chanukah celebrates two important events. Judah Maccabee, a member of the religious family of Hasmoneans, and his small volunteer triumphed over the brutal and powerful Syrian Greek ruler Antiochus IV. Chanukah celebrates the capture of the Temple from the Maccabees. Although Hanukkah also celebrates a military victory, its major symbol — the Hanukkah menorah, or hanukkiah — reminds us of the miracle of the oil. As the Jews purified the Holy Temple, they found only one flask of the oil for the eternal lamp — enough to keep it burning for just one day. But a miracle occurred, and the oil lasted eight days and nights until more oil could be brought from afar. That miracle explains why we celebrate Hanukkah for eight days and also why Hanukkah is called the Festival of Lights. The word "chanukah" comes from the Hebrew word for "dedication." 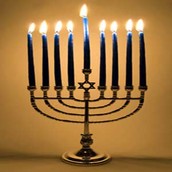 To celebrate the eight nights of Hanukkah, people light candles on a branched candlestick called a menorah. They start with one candle and add a new candle each night. In addition to lighting the candles, gifts are exchanged and children play holiday games during Hanukkah.

While celebrating the eight nights of Chanukah, people often light candles in a menorah (shown above). 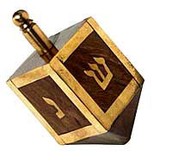 A four sided top, called a dreidel is used to play a gambling game with small candies or nuts. Players get an equal amount of candies, and some are placed into a "pot" in the center. Players take turns spinning the dreidel. Each side of the dreidel bears a letter which tells the players whether to put in or take out candies. The game ends when someone has all the candies, or when the candies have all been eaten.

Hanukkah is celebrated 8 days even though the miracle of the oil was really only 7 (the first days light should not count - it is natural) to teach us that everything in the natural world is really a miracle caused by God. Nothing happens without Him willing it.
Hanukkah 2013 Dates, Rituals, History And How Tos For Celebrating The Festival Of Lights