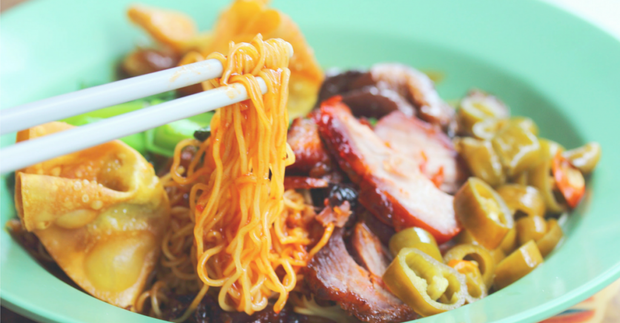 The most famous way of making noodles in China is 'la mian' (or 'chen mian). Noodles are made by simply stretching the dough with both hands. This type of noodle dishes are typical from Northwestern and central China. There is another famous way of making Chinese noodles, called 'dao xiao mian'. In this case, the chef holds a well kneaded dough in one hand, and a knife in another. The desired shape of the noodles is achieved by 'slicing' the dough. There is a third variety of Chinese noodles, which is the one that I am going to discuss next in more detail. This third variety is called 'shou gan mian', which can be translated as hand-made noodles by using a rolling pin. The reader may have already guessed that 'mian' means 'noodles' in Chinese (it also means 'flour', depending on the context).

Typical Northeast Chinese noodles are really light, even if they are cooked with meat. They are very different from the ones that can be found in restaurants in Western Europe. The concrete recipe I will be describing in detail is called 'da lu mian'. It is a very suitable dish for spring or summer, and very home-made, almost impossible to find in the restaurants in China.

Making good dough is the first step towards making good noodles. Firstly, the dough cannot be too soft, so one should be careful with the amount of water being used. To make the noodles more stretchable, it is a good idea to add salt and eggs to the flour when making the dough. The use of eggs, however, is not a must.

After making the dough, trying to roll it as thin as possible needs patience and determination. A useful device is the 'pasta maker' (in China it is obviously called 'noodle maker'). The noodle maker is very helpful for cutting the noodles into even strips, as well as for saving a lot of energy. The disadvantage is that it is not easy to clean afterward. Here, I will describe how to make the noodles by hand.

To prepare the noodles by hand, follow the steps given next (the ingredients given are for three or four people).

Mix three cups of plain flour with three quarters of a cup of water, one big egg and one table spoon of salt. Knead the dough well.

Roll the dough into a thin sheet.

Fold the dough sheet twice, make sure that you dust plenty of flour on the surface before folding.

Then, boil the prepared noodles in water (you can add salt to avoid the noodles getting stuck together). And, after removing the noodles from the sauce pan, rinse them well in cold water. The noodles are cold now and ready to be served.

There are many different noodle sauces. Here, I describe one of the most popular ones, consisting of eggs and tomatoes. More help wanton mee

Chop the tomatoes into pieces and whisk two eggs.

In a heated wok, pour around 5 table spoons of oil and then add the tomato pieces in.

When the tomato becomes softer, pour in 1.5L of water and bring the water to boil.

Pour the whisked eggs into the boiling water. Use a spoon to stir the soup.

Traditionally, there should be a separate bowl of sesame paste and a plate of thinly shredded cucumber on the table.