As the CloudOpting platform was already in place, we wanted to setup a series of Hackathons to validate the platform and the associated business model, and receive feedback from potential users of CloudOpting. The aim was to spread the knowledge of the business opportunities of this new Public Services Marketplace.

These hackathons were focused for public service providers that want to increase the visibility of their applications and services by migrating them to an EU Marketplace migrating their services to a central market place, but also oriented towards authorities (service subscribers) that wish to consider new opportunities. Representative organizations with specific profile were contacted to ensure enriched debates and the success of the event. 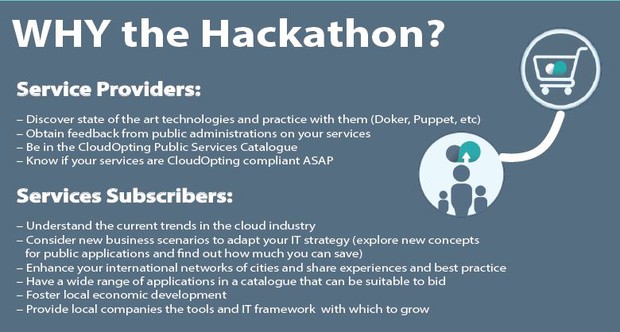 To ensure that we achieved the planned objectives, the Hackathon was divided into 3 main blocks

Technical Day -The second block was a full-day which explored the technical aspects of CoudOpting in depth, and taught participants how to migrate an application to the Platform. It was divided into the presentation of the Technologies of CloudOpting Platform and an afternoon "Hands-on-Code" tutorial for participants to learn how to migrate an application.

Networking Day - The last block was a half-day session focused on presenting the Business Model , facilitating open discussions with relevant stakeholders and sharing the results between the 2 cities in realtime.

The Locations of the Hackathon

The hackathon was performed in 2 different venues located in Sweden and Spain. The 2 venues are relevant business centres related to the CloudOpting Project.

The Hackathons performed in Spain were in VITA Entrepreneurship Center (Sant Cugat ) and those performed in Sweden were in NetPort Science Park (Karlshamn). 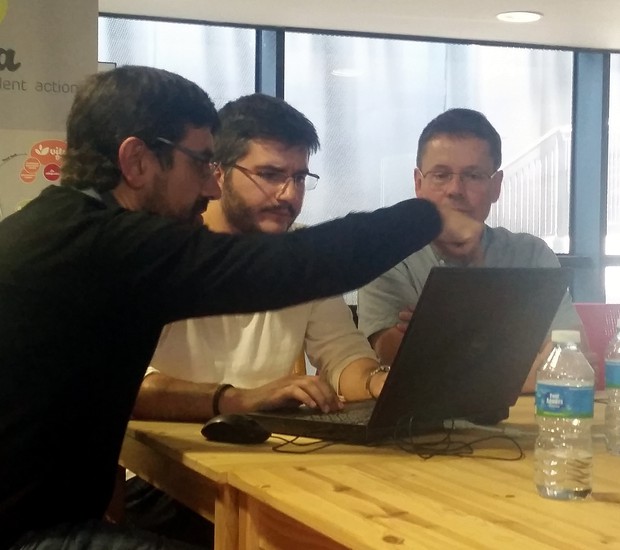 Oriented to showcase the platform technologies. It was held in Sant Cugat on November 2nd and in Karlshamn the 23rd of the same month.

These two full-day Hackathon's started exploring the CloudOpting architecture, going through the technologies used in CloudOpting, namely Docker, Puppet and Tosca and ending with a hands-on code session where the attendees could try the technologies for themselves.

CloudOpting provided the participants with a Virtual Machine with all the software pre-installed and let them try out the examples that were being shown in the presentations to dirty their hands within real coding.

The easiness of the solution and the know-how explained was tried out by the participants making them think about the adoption of these technologies on their own solutions.

The second part of this Technical Hackathon was focused on the Service migration. We started identifying the application blueprint, then building the Docker images for each microservice and creating a link among the containers and volumes. After that we built a compose files as the first step to automate the deployment, and then continued with the creation of a puppet manifest for automated configuration. The last step was the creation of the Tosca file , a standard topology file. These were the main technical steps to be able to have a Service available within the CloudOpting Marketplace.

We received a large amount of feedback during the two technical hackathons that will be treated in later documents.

@docker session at the hackathon: https://www.periscope.tv/ignacio_soler/1jMJgAAZkEMKL

The Networking Day was focused on introducing CloudOpting possible business models and discuss the needs and requirements that the stakeholders have : public administrations, service providers and cloud providers.

It took place simultaneously during December the 1st in the installations of NETPORT (Karlshamn, Sweden) and VITA (Sant Cugat, Spain).

The Networking Day was focused on introducing possible CloudOpting business models and discuss the needs and requirements that the stakeholders have: public administrations, service providers and cloud providers.

It took place simultaneously during December the 1st in the installations of NETPORT (Karlshamn, Sweden) and VITA (Sant Cugat del Vallès, Spain).

The Open discussions were the backbone of the event, with continuous exchanges of views on the existing benefits and barriers. Interesting discussions about public procurement and the role of CloudOpting in the European public services arena were carried out. This section presents the most relevant comments from the different types of organisations attending the event:

• Regional Governments: There is an opportunity for CloudOpting in the form of a homologated entity that has undergone a process of public concurrence, where local administrations from the region can choose among its homologated services without having to undergo a complex procurement process.

• Aggregators of Municipalities: It is fair and understandable that SMEs join CloudOpting if they consider that t is a competitive advantage for them to be in it, but in order to ensure free competition public administrations cannot make it a requirement.

• Municipalities: The three presented business models are suitable and could be adopted by the Public Administrations in every country depending on the size of the organisation and the contracting policies and legal framework. It has also to be taken into consideration that the current procurement model of aggregation of demand has been proven that is not the most suitable solution and that CloudOpting would have more chances of success with a procurement model based on the aggregation of offer.

• Service Providers: There is a very low access of SMEs to the European Market because they lack the resources and the channel to spread beyond their local area of influence. CloudOpting could facilitate them the mechanisms to access the market and gain visibility at European level. 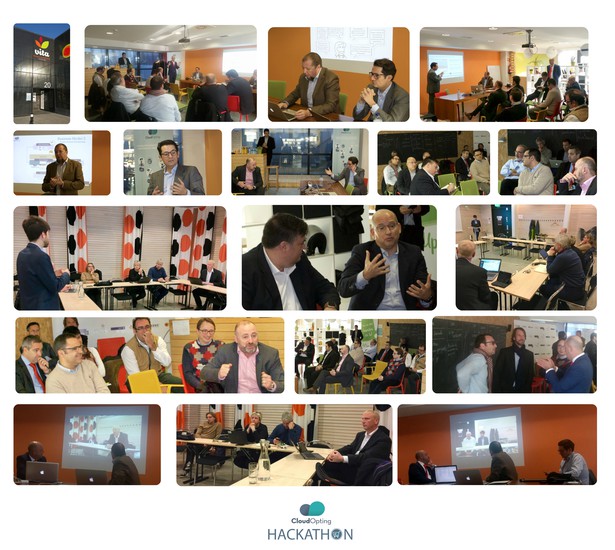 CONCLUSIONS OF THE HACKATHON

According to the participants from the two locations, the Hackathon was a success both in terms of attendance and of valuable feedback obtained to improve and shape the whole concept of CloudOpting.

A relevant representation of Services Providers, Services Subscribers as well as Cloud Providers were present at all the events. During the Technical Hackathon, interesting discussions about technical topics like scalability and docker were held.

After the first Technical Day of the CloudOpting Hackathon, the Networking Day was carried out. This second part was focused on presenting the different Business Models CloudOpting is considering and on an open discussion, which was the backbone of the event.

This open debate tackled the needs and requirements that the Public Administrations have concerning the procurement of ICT services and the role of CloudOpting as a feasible solution in the provision of these services, with continuous exchanges of views on the existing benefits and barriers, as well as the role of CloudOpting in the European public service arena.

All of the attendees, both public and private, were very enthusiastic and participative, providing positive feedback and inputs about the product, its benefits, and about the possible business models that could support CloudOpting.

The goal of this survey is to get feedback relating to the CloudOpting business models from two perspectives: on the one side, to stimulate a debate amongst the public administrations that participated during the second day of the Hackathon; on the other side, to better understand their business needs, requirements and verify that the proposed business model fits with the current situation for both Service Providers and Service Subscribers.

By filling out this short questionnaire, you will have contributed in the improvement of CloudOpting.

Go to the Survey