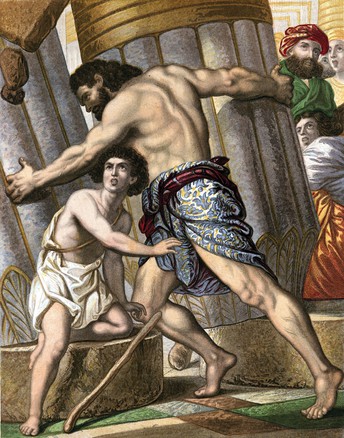 Who is the strongest person you know?

After Deborah, the Israelites continued in their cycle of idolatry, foreign oppression, repentance, and God-given deliverance by a judge. Samson was one of the most fascinating judges of Israel. Samson was an answer to prayer, born to a barren woman and announced by the angel of the

Lord. He was a Nazirite from birth, which meant that he was never to drink alcohol, eat unclean food, or cut his hair. Yes, Samson was special, and he knew it. He had little regard for his parents or God’s laws. He was physically strong, but morally weak, especially when it came to women. This weakness became his downfall when a Philistine woman named Delilah got Samson to spill the secret of his strength. Despite his sinfulness, God worked through him to deliver Israel from the Philistines.

Dear heavenly Father, thank You for Your Holy Word, which makes us strong in faith so we can be helpers and show love for others. Amen

God is my strength.

God gave Samson his strength so that he could be a good judge and leader for the Israelites. But Samson did not put God first. Samson put his own wants first, and he had a weakness for women.

Samson loved a woman who was an unbeliever and a Philistine, the enemies of the Israelites. He ended up telling Delilah the secret of His great strength. Even when Samson made bad choices, God worked through him to help the Israelite people.

Sometimes when we are the weakest, that’s when God’s strength can come shining through us the clearest, because we know it’s not our strength but God’s. (Read 2 Corinthians 12:7–10 to read how the apostle Paul dealt with being weak.)

Not one of us is strong enough, powerful enough, or good enough to save ourselves. That's why God sent Jesus. Jesus defeated the devil and death by His suffering and death on the cross.