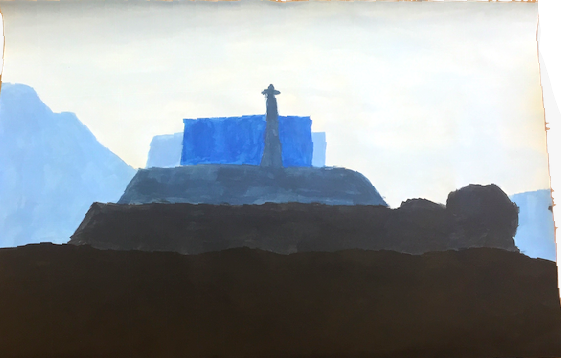 Element of Art & Principle of Design

The element of art I used in my work was color. I organized these to achieve the principle of design Unity. Unity is made by repeating one or more elements throughout an artwork which should create a harmonious feeling. I used my blue, white, and black paint to creates different shades and tints of the color in my artwork. The different values of my paint helped make a harmonious feeling which is unity.

Alcatraz was built in the early 1850’s to be a citadel for the U.S. Army. It is located in San Francisco, California. They chose to build Alcatraz because it formed a triangle with Fort Point and Lime Point, protecting the entrance to the bay. American culture is reflected in this work of art because Alcatraz was the first light house on the West Coast, a Civil War fortress, and was home to many infamous prisoners.

Juan de Ayala mapped out/discovered the island but the U.S. Army built the fort. The artist created Alcatraz where it was because it formed a triangle with two other forts.When it was turned to a prison the light house was used to see prisoners, especially if they tried to escape by swimming away. It was built in 1854 and they kept adding on and making improvements until 1934. The materials used to create Alcatraz were stone, iron, steel, wood, brick, concrete, lime, and clay. It was closed down in 1963 because the lack of funding.

I chose this landmark because I read a book about Al Capone which made me interested in Alcatraz. I feel like Alcatraz used to be relevant to society but not anymore since it was closed down. It should still be standing though because it is important to our countries history. Many things in our history can’t be preserved so we should try to preserve the things possible.

Follow Meredith Jenkins
Contact Meredith Jenkins
Embed code is for website/blog and not email. To embed your newsletter in a Mass Notification System, click HERE to see how or reach out to support@smore.com
close