1.The Eiffel Tower was built for the 1889 Paris exposition and was not intended to be permanent.

4. The paint on the Eiffel Tower weighs as much as 10 elephants.

Tunnel complex for millions of skeletons. 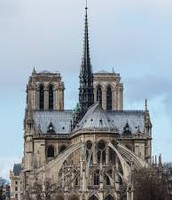 2. There are hundreds of "hidden mickeys" all over the park.

4. The oldest person to visit the park was 106 years old.

Lots and Lots of things to do in Paris, France such as Disneyland Paris, The Louvre etc.