The Mott Class has been busy completing the final stage of our unit on illustrators. We decided to create a book about fairness. We studied fairness when Teacher Kim brought in a cake and wanted to eat most of it and shared only a small piece with the other 13 people in the room. We realized that fairness is not just sharing but sharing “equally." We decided as a group that we would create artwork that would be displayed in a black and white photo, similar to the artwork in Mo Willems' series Knuffle Bunny. Then the Mott Class listed ways to be fair like “playing with my mom and all my friends” or “inviting all my friends to my birthday party." Students created large pieces of art out of trash like an artist in the book Trash Man did. We used lots of beautiful shades of brown in our paintings that we created ourselves. They look amazing in black and white photos. We are hoping to share our booklet about Fairness soon! 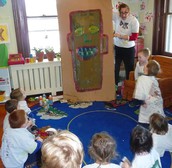 The preschool class has begun learning about construction and all the different people it takes to build or restore a structure. Classes have been walking down to the end of the block to see what changes have occurred after a building was demolished and what part of the housing unit is being built next. The children’s vocabulary grows each day as we read books and have discussions at circle time. Many small wooden shapes and pieces are available, along with wood glue, for the children to create their own structures.

Our science table has an Aero Garden in which we can grow lettuce seeds in water under a grow light. Students enjoy watching lettuce grow and then picking it to feed to the guinea pig.

The Hicks Class continues to learn about diversity through stories and activities. During Ally Week, Sandra Chapman came to visit our classroom and spent time teaching us about social justice. She is an amazing teacher who created a rich conversation that carried over for days to come.

When the Rustin Class teacher started planning for Ally week, she thought carefully and deeply about the significance of the Black Lives Matter movement. She spent time thinking about the messages and how to bring them to her kindergarten class. Even though it felt complex and challenging, her belief in equity and social justice made the challenge highly motivating.

She gave serious thought to the images and narrative that children and adults in a predominately white middle class community are receiving about people of color. She decided the message of empowerment, fairness, beauty, and strength should be delivered prior to discussing what the words "Black Lives Matter" mean?

Amazing Grace by M. Hoffman, My People by Langston Hughes, All the Colors We Are by K. Kissinger, and Black All Around by P. Hubbell were just a few of the beautifully and powerfully illustrated books she read and discussed with the class. She made copies of images of Black men, women, and children, then cut them out and discussed them with the class. The pictures were hung up on the wall for all to see and think about. Students learned about the first Muslim-American Olympian who won her medal while wearing her hijab, the first African-American prima ballerina, Misty Copeland. They saw images of Black doctors, dads, teens, and Bayard Rustin. One of the photos was of Trayvon Martin smiling in the sunshine and one of him wearing a hoodie. The students discussed how the photos made them feel. The teacher told the students stories of the people in the photos. They identified with wearing a hoodie just like the young man in the picture. After sharing all of the wonderful stories they had a hard discussion - one in which they learned that not all people look at the people in the photos the same way the teacher does. Some people look at the photos and see danger. Is that fair? We discussed the word "matter." What does it mean to matter? The message: When people no longer feel that those with brown skin are dangerous or harmful, then all lives will matter. 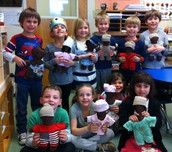 The Power of the Doll - Doll Making

“Doll making is a deeply evocative experience. Dolls reveal the images and narrative of a person’s inner life. The doll captures and reflects a glimpse of the psyche. Some dolls are created as mirrors of the self, as figures in a personal myth, and as allies, elders, healers and guides on the path to authenticity and health. The doll narrates a deeply personal story from an adventure to the interior. “ Dr. Geri Olson, associate professor in the Psychology Department at Sonoma State University

Making a doll is an extremely powerful process. It’s amazing to observe young children trace templates of a very simple basic human form onto fabric, cut it, sew it, stuff it, and dress it. The children were transformed from working with fabric, thread, and stuffing to working with a small human figure. The teacher delighted in noticing how many skills the children were learning. Best of all were the conversations that took place between the children and the teacher while sewing – one conversation was about how beauty could possibly fall in love with a beast. What was it about the beast that she loved? The teacher felt privileged to observe the deeply personal and meaningful connection the children made with the dolls. Everything about this work was intentional – from the choice of the brown fabric to deciding if the dolls would have features or not.

After the dolls were completed, the children were asked to look at their dolls and use their imagination to decide what their dolls were going to look like. The teacher discussed the idea that dolls without features allow you to imagine each time what your doll looks like. Some children chose to leave their doll face blank and others chose to add features. When asked by the teacher if they were okay with sewing the features onto their doll's face, they all said, “NO!” The teacher made very simple features for the children who wanted them. Students played with the dolls in class for only one day because they all insisted they wanted to take them home.