Ellen is using Smore newsletters to spread the word online.

Get email updates from Ellen:

We need to end the violence! Join together to fight the spread of other violent protests! Mike Tyson will be leading this violent protest to end violence. We all know you can only fight fire with fire. Be prepared for some casualties, this is a turning point for America's domestic peace. If we are successful future protests will be nonexistent and the public will be cooperative.

There is a planned protest of pants at the Annapolis mall on March 22nd that we will go to protest and hopefully discourage
Get Directions
Mike Tyson is a retired heavyweight boxer who was the undisputed heavyweight champion of the world. He is the best possible leader for this protest because he is known to be aggressive and will do what is needed during this violent protest. 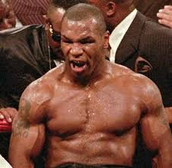 Ellen is using Smore newsletters to spread the word online.