Jada is using Smore newsletters to spread the word online.

Get email updates from Jada:

The King of Rock & Roll

The King of Rock & Roll

The Beginning of Elvis

The famous musician was born on January 8, 1935. His hometown was Memphis, Tennessee, but he was born in Tupelo, Mississippi. Elvis' career started in Tennessee in 1954, when he recorded a song with producer Sam Phillips at Sun Records. Pretty soon, Elvis had his band for his music: Scotty Moore as a guitarist and Bill Black as the bassist. Presley was an early pop star working with rock, country, and the blues. In 1956, Elvis made his very first song, "Hearbreak Hotel" and it went viral (he also got a record deal for his outstanding song)! In November 1956 he made his film debut in "Love Me Tender". In 1958, Presley got drafted to the military service, completing basic and advanced training, but soon, returned back to his "special spotlight". Several years later, due to prescription drug abuse, Presley died of an heart attack at the age of 42 in 1977. His death was covered up by his family, but the story still got out of its cage! The world was devastated! Elvis Presley is still one of the most remembered pop stars and he is always loved. 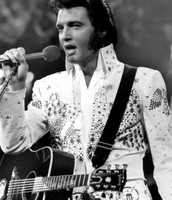 Presley released his song, "Heartbreak Hotel" in 1956. This was his first on his list. Presley's song was based on suicide commited in Mississippi. 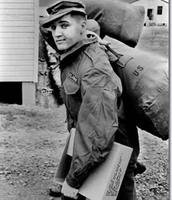 Elvis was drafted into the army.

In 1958, Presley was drafted into the military service. He spent 3 days at the Fort Chaffee, Arkansas, Reception Station. He left active duty at Fort Dix, New Jersey, on March 5, 1960 and received his discharge from Army Reserve on March 23, 1964. During Presley's active military, he served as a member of 2 different members armor battalions. During his assignment, he completed basic and advanced military training. 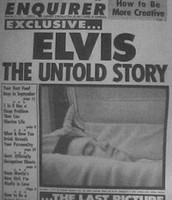 Elvis Presley suddenly dropped in the bathroom of his Graceland mansion on the afternoon of August 16, 1977. He was rushed to the Baptist Memorial Hospital in Memphis, Tennessee. He was pronounced dead, then he was shipped to the morgue and autopsied the same afternoon.

Their Deaths Were Just Alike!

They Died The Same!

The death of Elvis Presley was just like Shirley Temple's death! Elvis and Shirley Temple both died because of natural causes, but Shirley just recently died. Temple died at the age of 82 in Woodside, California, where her family is. Elvis and Shirley were both young stars back then. She will be missed and she will never be forgotten, just like Presley.They are both inspirational celebrities.

Elvis influenced us all!

He Was an Inspirational Leader...

Presley was a good influence to the world. He brought a positive affect to music industry and he inspired a lot of other singers to be themselves and rock out! Presley was an important person and still is today! Presley made every song of his unique in his own way. He gave his fans a piece of his heart through the lyrics of each song he wrote. Elvis Presley's impact on music is still very relevant today.

2- Elvis purchased his first guitar at the age of 11.

3- Elvis Presley's song "Heartbreak Hotel" was based on a man who was lonley and committed suicide.

4- Presley's nickname for his manhood was reportedly "Little Elvis".

5- Elvis was a fan of baseball!

Websites Used for the Frenzy!

Jada is using Smore newsletters to spread the word online.