georgia is using Smore newsletters to spread the word online.

Get email updates from georgia:

A craft guild was a group of people who were skilled at certain trades, they were controlled by experts at that certain trade. It set standards for the quality of products, controlled prices, eliminated competition, and kept out unskilled craftsmen. A guild would look after their own members in times of ill and poverty, they supplied their workmen with the supplies they needed. Becoming a member was an extremely long process and usually had three levels of training to pass. Common guilds were bakers, tailors, sword makers, armour makers, and tanners.

Streets Buildings: Most streets were narrow, and filled with garbage. Towns were usually surrounded a castle/palace, the people built walls around the city to protect them. Houses were crowded and had several stories with the upper floors hanging over the streets.

Roles Of Markets/fairs: Both markets and fairs exposed exotic goods. They were places for people to meet (like a gathering place). Both exposed trading. People learned that they could make and sell things which brought finely crafted good from far and wide.

Sanitation/Cleanliness: Streets were filled with garbage because people would routinely emptied pots and garbage on the streets. Streets often had open sewers and pigs running freely at night to eat all the garbage. 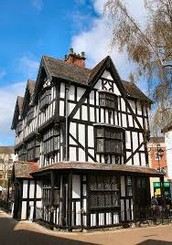 I chose Hereford which is a small town in England. it was one of the earliest castles in England. Hereford Castle was probably destroyed when the Welsh sacked Hereford in 1055, but seems to have been replaced by the following decade. 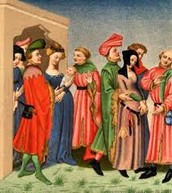 With trade your wealth wasn't measured in land. Now people could become independent because they could make their own money.

-People were able to do as they wished now.

-Craft guilds held a big role in freedom because now people could make their own money and be independent.

parts of a castle: there is a keep which is used as a place where you would hide in case of an attack. kitchens were always busy and they entertained guests with their food. Towers provided an advantage for attacks and had views from everywhere. Gatehouse used to bring supplies in and out and to get people in. Inner Courtyard was the life of a castle and held special entertainments. Chapel gave castles a sense of importance and also a place of worships.

Life in a castle: life in a castle was harsh. Life began at sunrise when the guard blew the days start on a trumpet. meals were cooked in large kitchens. Each royal had their own room and a couple servants to help them. Each meal of the day is eaten together. Holidays were breaks from work.

Role And How To Become One: Knight hood training was a long and hard process. it began at the young age of 7. From the ages of 14-21 were in the apprentice training. 21 was the official age you could become a knight. you had to learn how to fight, how to ride a horse, and how to do both at the same time.

Role Of Jousting: a way of practicing battle. it was also a fun way to pass time for boys. it taught knights how to ride horses and It was also a great way of entertainment.

Chivalry: was the quality's and behavior of a knight. it was like a moral system.it was bravery and honour.

The Code Chivalry: it was to live in honour and glory, to fight for welfare of all, obey those placed in authority and to speak the truth.

Weapon: Bow and arrow- constructed into parts. everyman must own at least one. the training for the bow and arrow toke a long time. but once you understand it their easy to use.

Siege Weapon: ballista- it was like a giant cross now.it wasn't exactly long range, it toke a long time to load, and it wasn't very useful. 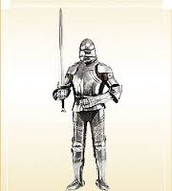 A suit of armour

knights used it for protection

-Most people ate bread, although only the richer could afford to grow white bread, so peasants mostly ate barley.

-Pigs were the peasants main support of meat

-People would drink water from the river although it was very unpleasant to drink, and milk which didn't stay good for to long. The most common thing to drink was ale which toke while to brew.

-People couldn't sell beer/ale unless they had permission from the lord.

-Breakfast was eaten between 6-7 in the morning, and peasants ate at sunrise.

-Supper the biggest meal and usually had multiple servings, usually eaten at 6-7 in the evening. Peasants ate at sundown.

-Woodwind instruments were popular in the middle ages.

-It was about 1300's when musical composers became known for their pieces of work.

-Medieval music would have sounded close to what we call classical music now a days.

-The music that was played in the 1400's to 1500's was traditionally slower and composed, but on special occasions such as royal wedding and kings events faster more dance-along music was played.

georgia is using Smore newsletters to spread the word online.