Proteins provide structure for tissues and organs and carry out cell metabolism. A protein is a large complex polymer composed of carbon, hydrogen, oxygen, and nitrogen, and occasionally sulfur. The building blocks of protein are called amino acids; the proteins' monomer. 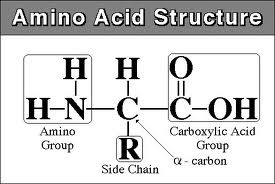 The polymer of a proptein is a polypeptide. A polymer is the substance of a molecular structure built up of common bonding units.

Examples and functions of Proteins

Some examples of protein are meat, eggs, almonds and other nuts.

The function of a protein is to create structures for tissues and oprgans. An example of this would be... transporting oxygen in the bloodstream and providing immunity.