Get email updates from Dave:

What is Triathlon and Can I do it?

So you have been hearing about this swim, bike, run thing and it sounds interesting, right? Well, it is and here are a few of the things you will need to know before or while you are getting started. You will need gear; a bike, helmet, goggles, (a wetsuit), running shoes....and these are just the basics. You will also need water...good water to swim in and for most of us that's a pool/ gym membership. You also need a commitment of time because triathlon is more of a lifestyle. Swimming and running don't take up THAT much time, but the drive to the gym, getting changed in and out of your swimming gear, shower, and the workout can take time. A 30-minute swim may cost you 90-120 minutes by the time you drive to and from as well as change in and out of your suit. The bike will be another time commitment with a short workout being in the 60-minute range while longer rides can be 2-6 hours depending on the distance you decide to race. The run is the most time-efficient discipline to train for as well as being the most cost-effective as well. For the sake of starting we will talk about the sprint distance since that is where we all start and we should all live for the first few seasons.

What is a sprint and should I do an Ironman? If you are asking this question you should clearly start with the shortest possible races just to get a taste for the sport before the full-commitment of an Ironman or even a 1/2 Ironman. Sprint distance at the USA Triathlon Age Group Championships is a 750 meter swim, 20k (12.6 mile) bike, and 5k (3.1 mile) run. Most of the local triathlons shorten the swim to somewhere between 300 and 400 meters because this is the one event that scares most athletes. The bike portion usually is closer to 10-miles but the run is 5k. There are some race directors who call their race International Distance and this means that one or more of the legs is longer than the 300-750 swim, 10-12 mile bike, or 3.1 mile run.

We all started with the sprint distance races just to see what the sport is like and that is the suggestion for you too. Expect to be out there for 1-2 hours for that distance. The closer to an hour you are, the more ready you may be for the next distance and the next challenge which is the Olympic Distance (because this is the distance they compete in at the Olympic Games- double the sprint distance).

THERE IS NO COACH in the world who would suggest starting your 1st or even 2nd season with a sprint, then moving to the OLY distance, then a 1/2 and finish the season with a full distance. I have seen it before and it does not end well. There is a huge difference between the former and the latter and you should look at it as a process as you move up.

In this section we will talk about two things; how to get started in the world of triathlon, and how to get fast at triathlon's shortest distance. 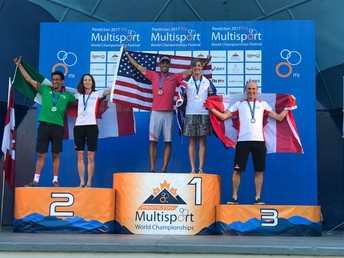 This is the step-up distance where you should move to if your ultimate goal is doing a 1/2 distance or full distance, or if you want to be an USA Triathlon elite athlete with hopes of making the United States Olympic Team.

Half Distance or 1/2 Ironman

I like to call it the 1/2 since Ironman is a brand and not a distance. This is THE distance for many of us in triathlon because of the time and physical commitment it takes to complete and compete. As you climb the distance ladder, the 1/2 distance is just one rung, but it is often the full people come back to because it is a manageable to both train and pay for.

Follow Dave Slavinski
Contact Dave Slavinski
Embed code is for website/blog and not email. To embed your newsletter in a Mass Notification System, click HERE to see how or reach out to support@smore.com