The Achaemenids were successful in standardizing weights & measurements to help grow their comers in trade. These people were also successful in coining money so that it would have value.

The Achaemenids were unable to exist after this time period as their proven leaders passed on & their successors fell into a civil war with one another. As time went on, the civil wars caused the Empire to divide. The Achaemenid Dynasty was unable to flourish when it's last real leader died and the generals divided the empire into 3 parts, known as Egypt, masadonia, and the Asian minor. 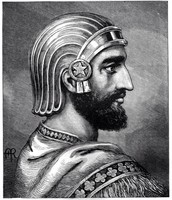 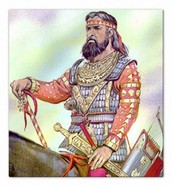 Aspects of the Civilization

Advanced Cities- The Achaemenids started as small cities who came together, then when they needed to grow in size, they would conquer or unite with more small cities. Most famous were Babylon- Main capital

Social Structure- Not much is known about social structure, but we do know they had three classes, warriors, priests, and farmers or herdsmen. King was elected through a chosen family by the warrior class. The king was sacred and a royal charisma attached to the king. Used ideas of political leaders and social structures from captured cities. Some of these social structure date to today Persian culture.

Religion- Under Cyrus the Great they did not known if he tried to convert others religion. Most of Iranian subjects and later rulers followed the teachings of Zarathushtra. Darius and Xerxes tried to make others worship Ahura and Mazda and they destroyed other temples of their Gods. Later they went back to religious tolerance. Religions including Judaism, christian

Government- The Achaemenidian government was a Feudal Monarchy. King/Ruler, part of the Persian Empire, started in 550 BCE, Ruler was Cyrus the Great he was half Persian and half-median achaemenids, ruled by series of monarchs who united small cities together to form one large city.

How They Developed?- a they were able to exist because many surrounding territories were wanting to join them due to them consistently growing in strength and size. They were ruled by a great Monarch, Cyrus the Great and Darius the First

Still Exist Today?- They do not exist today but because their civilization was broken into three parts Egypt Macedonia and The Asian Minor.

I am Kurash [ "Cyrus" ], King of the World, Great King, Legitimate King, King of Babilani, King of Kiengir and Akkade, King of the four rims of the earth, Son of Kanbujiya, Great King, King of Hakhamanish, Grandson of Kurash, Great king, King of Hakhamanish, descendant of Chishpish, Great king, King of Hakhamanish, of a family which always exercised kingship; whose rule Bel and Nebo love, whom they want as king to please their hearts. When I entered Babilani as a friend and when I established the seat of the government in the palace of the ruler under jubilation and rejoicing, Marduk, the great lord, induced the magnanimous inhabitants of Babilani to love me, and I was daily endeavoring to worship him.... As to the region from as far as Assura and Susa, Akkade, Eshnunna, the towns Zamban, Me-turnu, Der as well as the region of the Gutians, I returned to these sacred cities on the other side of the Tigris the sanctuaries of which have been ruins for a long time, the images which used to live therein and established for them permanent sanctuaries. I also gathered all their former inhabitants and returned them to their habitations. Furthermore, I resettled upon the command of Marduk, the great lord, all the gods of Kiengir and Akkade whom Nabonidus had brought into Babilani to the anger of the lord of the gods, unharmed, in their former temples, the places which make them happy. 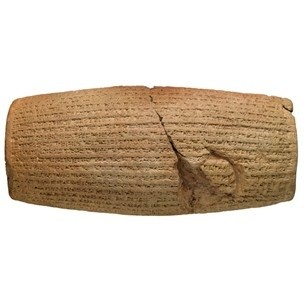 What Was So Signifiacant about the Achaemenids

The Achaemenids were one of the greatest and most powerful civilizations of their time. They knew how to grow, conquere, and thrive as a society. Their government structure was well mounted and for most of their existence, their leadership was great. Without learning about how they lived, we might not have learned how a federal monarchy is run because they were one of the very first societies to have this type of government.

They created the system of coining. Coining is putting the value of gold into money. This is what makes money have value, and without this idea money today may be completely different from what it is.